MEMBER LOGIN
We are open for visitors & tours! Please check out our “Planning Your Visit” page for more information. MASKING UPDATE (3/1/22): The D.C. Mayor's office has lifted the indoor masking requirement in most settings, so wearing masks is now optional at the House of the Temple.
This article originally appeared in the May/June 2022 Scottish Rite Journal. Ian Kirkpatrick, 32°, Valley of Knoxville, Tennessee

The Graham Manuscript of 1726 states: “How stood your Lodge at your entering—East, West and South—why not North also—in regard we dwell at the north part of the world and we bury no dead at the north side of our churches so we carry a Vacancy at the north side of our Lodges ... ” Yet what is the ritual significance of not burying our dead in the north of the churchyard? Why should we inter the departed in the other sections of the churchyard instead? What does the lodge benefit from following a religious practice when the lodge is not a religion? Again, why is the North side of the lodge dark?

In the sixth-century extracanonical Ethiopic text The Conflict of Adam and Eve with Satan (also known as The Book of Adam and Eve), we learn of a sea of water created by God to the North of the Garden of Eden. The text explains that

when God made Adam go out of the garden, He did not place him on the border of it northward, lest he should draw near to the sea of water, and he and Eve wash themselves in it, be cleansed from their sins, forget the transgression they had committed, and be no longer reminded of it in the thought of their punishment. (S.C. Malan, trans.) 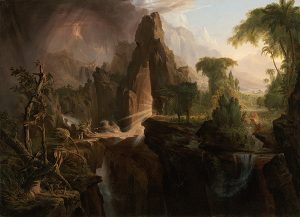 Photo: “... when God made Adam go out of the garden, He did not place him on the border of it northward,” we read in The Conflict of Adam and Eve with Satan. Thomas Cole, Expulsion from the Garden of Eden (1828). Oil on canvas. Source: Wikimedia Commons)

In this work, North is also the abode of Satan and his company and, worryingly, Satan claims he can take Adam and Eve to the sea of water himself.

Elsewhere in The Conflict, we follow Adam and Eve into the Cave of Treasures, where they live after the Almighty has cast them out of the Garden. In this cave, God sends the Angels Michael, Gabriel, and Raphael to bring Adam and Eve golden rods from the Indian sea, incense from the East border of the Garden of Eden, and myrrh from the Western border, respectively. These were placed in the south, east, and west respectively. Nothing was placed in the north, as this was impossible: “For the mouth of the cave was on the north side.” (S.C. Malan, trans.)

The symbolism found here is clearly very rich. Not only does the text provide multiple reasons for the emptiness of the North; there also are clear parallels with the three Gifts of “gold, frankincense, and myrrh” of the Magi to the young Jesus (Matthew 2:11), who is sometimes referred to as being a second Adam.

Although a figure is never given in the Gospels for the number of the Magi themselves, a popular Western Christian belief is that there were three Magi: King Caspar of India, King Melchior of Persia, and King Balthazar of Arabia. These names originate in a Greek manuscript, probably composed in Alexandria in the 500s, included in Excerpta Latina Barbari in Latin in the eighth Century. (See: Tony Burke, Secret Scriptures Revealed: A New Introduction to the Christian Apocrypha.) Notice the original Greek composition date is roughly the same time as the writing of The Conflict of Adam and Eve with Satan. It is quite possible that this connection was emphasized purposefully by the author of the sixth-century extracanonical text to connect further the doctrines and events found in Jewish and Christian texts.

Moreover, this description of the layout of the Cave of Treasures easily could be mistaken for the layout of a modern lodge and the symbols therein connected to various parts of our modern ritual. It is interesting that the gifts of the Cave of Treasures are arranged in such a way as to mimic the Garden of Eden. The addition of these presents of the angels to Adam and Eve can be viewed as a ritual inclusion of the Spiritual dwelling in the Physical dwelling. If that is true, then the mouth of the Cave in the North also would correlate to the sea of water North of the Garden. We even may look at the modern Masonic lodge as a similar dwelling, accepting that it may not have been the original intent of the degree crafters.

While the God of the Conflict text could not allow Adam and Eve to forget their transgressions in disobeying God in Eden by tasting of the fruit of the Tree of Knowledge of Good and Evil, a release may be granted to those who strive to become worthy to receive it.

The roles of memory and forgiveness, of course, are important as well. There may be many things we freely long to forget throughout our lives—earthly transgressions, social faux pas, and even simple errors in judgment. For some, the lengths they may go through to forget far outweigh the initial transgression. For others, the first mistake becomes a pattern from which they find it difficult if not impossible to escape.

The gift of memory should not, however, be thought of as a punishment, but rather as the gift of reflection. It is by reflecting on our mistakes and tempering actions that we deem problematic that we strive to be better men, members of our community, and Masons.

In our travels from the West towards the East, we may find it prudent to linger for a moment in the darkness of the North and contemplate this transformation. Then shall we discover, with the assistance of our brethren, an even more just and fortified illumination in the East and note, quoting from The Conflict, “little of darkness now remains … daylight will soon appear.” (S.C. Malan, trans.) •

Malan, S.C. The Book of Adam and Eve, also called The Conflict of Adam and Eve with Satan, a Book of the Early Church, translated from the Ethiopic, with Notes from the Kufale, Talmud, Midrashim, and Other Eastern Works. London: Norman and Son, 1882.

Photo: Renaissance Room, Grand Lodge of New York, from the West looking East: Notice there is no officer’s station on the left in the North, a place of Darkness. (Photography: Elizabeth A. W. McCarthy) 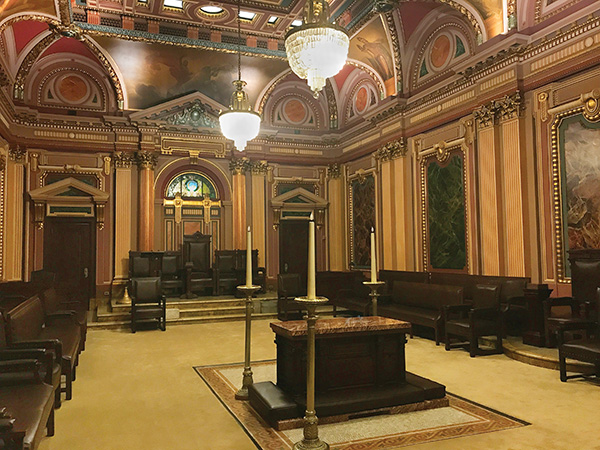