This article originally appeared in the November/December 2022 Scottish Rite Journal.

"Behold, how good and pleasant it is for Brethren to dwell together in unity!”—Psalm 133: 1, as quoted in “Freemasonry—A “Center of Union,” from the Statement of Unity Signing Ceremony program

The above words, read by Ill. Leonard Proden, 33°, Grand Prior and SGIG in the District of Columbia, Supreme Council, Southern Jurisdiction, in his invocation, opened a beautiful September morning at the House of the Temple on a stirring note. This would signify unity between the four U.S. Scottish Rite Supreme Councils in a momentous signing. Ill. James D. Cole, 33°, stated that recognition between all jurisdictions took place decades ago and that this event designates so much more. “Recognition is external,” noted the Sovereign Grand Commander of the Southern Jurisdiction. “Unity is internal.” Signing the Statement of Unity, he noted, was just the first step of an ongoing collaborative journey.

On hand to affix their names and seals to the document on September 7, 2022, were Sovereign Grand Commanders of the four mutually recognized Scottish Rite Jurisdictions in the U.S.A., shown right to left in the photo below:

Prior to the signing, each Grand Commander spoke movingly of the Statement of Unity’s significance, as did SGIG Eric Konohia, 33°, Deputy for the District of Columbia, United Supreme Council, P.H.A., Southern Jurisdiction, who opened the ceremony.

A handsome program accompanied the event, in which Ill. Arturo de Hoyos, 33°, Grand Cross, KYCH, Grand Archivist and Grand Historian , Supreme Council, Southern Jurisdiction, quoted a salient passage in The Constitutions of the Free-Masons by James Anderson (London, 1733) in order to provide historical context: “[...] Masonry becomes the Center of the Union, and the Means of conciliating true Friendship among persons that must have remained at a perpetual Distance.” Ill. de Hoyos notes that the “Unity Signing Ceremony celebrates that singularity of purpose by affirming itself as the ‘center of the union’ of which our forefathers spoke.”

The institution of Masonry, Ill. de Hoyos continues, “is able to transcend the barriers, whether artificial or real, which divide mankind, with a goal of creating bonds based upon the guiding principles of friendship, morality, brotherly love, relief, and truth.” 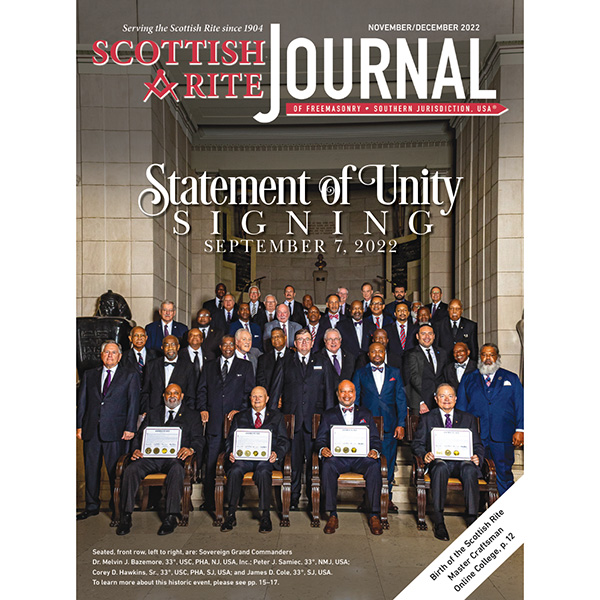