By James Ferguson, KCCH • House of the Temple Museum Intern

With the growing rise in popularity for traditional “wet shaving,” as it is called at the Museum of the House of the Temple, there are several unique and fascinating Masonic-themed straight razors which we would like to highlight. According to the November 20, 2014, article in the New York Times entitled “Shaving on the Edge (Both of Them)” by Courtney Rubin, the popularity of straight razors has grown so much that modern companies are going back and starting to sell brand-new razors designed according to 150-year-old specifics. Companies like Gillette, Black Jack, and Baxter are now selling your grandfather’s razor. Within our collection at the museum, we have three blades based on these plans which display Masonic artistic merit. 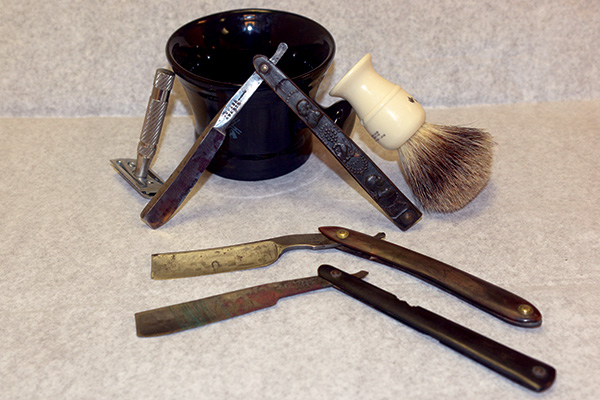 The Johnson’s Superior Razor company manufactured the first razor—or so we can surmise based on what is visible from the manufacturer’s mark on the tang. This razor is a spiked razor with wedge grind, meaning the razor’s point cuts at a ninety-degree angle. Yet the grind or profile of the blade from the back of the razor to the sharp edge is straight, like a wedge. The handle is a plastic composite with brass rivets holding the tang and handle together. The most exciting part of the razor is spotted on the left face of the blade, for here are several Masonic symbols etched in acid. Starting from the tip of the straight razor and moving down, we can see the blazing sun with a face. Under the sun is a crescent moon and a circle of seven stars. Next are three candles over two arched columns with a five-pointed star in the center. Then under the columns are a European-style square and compasses, with two trowels on the right and a plumb with a mallet and chisel on the left. Finally, at the heel of the blade is a level.

The next razor we have is another spiked razor, this time with a quarter hollow grind, meaning the blade tapers down to the edge at a more extreme angle leading to a sharper blade. This razor’s manufacture stamp is completely intact, leading us to manufacturer Joseph Elliot of Sheffield, England, dating the blade from 1821 to 1854. According to The Story of Cutlery: From Flint to Stainless Steel by Joseph Beeston Himsworth (1953), straight razors or cut-throat razors first appeared in Sheffield, England, around 1680, and soon after Sheffield became to razors what watches are to Switzerland, leading to many Sheffield razors becoming family heirlooms. This razor brings some Masonic significance because of the acid-etched symbols on the face of the blade including a square and compasses, a crescent moon surrounded by stars, and an open book, most likely the Holy Bible.

The final razor, sadly, has no Masonic symbols on the blade. The blade is entirely unremarkable, another spiked blade with a quarter-hollow grind. The manufacturer’s stamp reads Cuvier A. Paris that we at the museum can trace to other straight razors with the same mark, but there is no information about the manufacturer. The handle, however, is carved ornately with the shadows of four men’s profiles. Most of the details have worn away with age, but there are names above and below the patterns which lead to the assumption that these are the names of the men. Each profile depicts two influential Freemasons, two from the United States and two from France. For the United States, we can see Commodore Edward Preble, a Colonial Naval Officer in the War of Independence and war hero of the Blockade of Tripoli. Alongside the Commodore is the first Commander and Chief of the United States, George Washington. Between both Founding Fathers is an eagle holding an arrow, alongside a wreath of leaves with the word “Liberty”. Above the eagle is an oval of thirteen stars with the Latin phrase E Pluribus Unum—the familiar American motto signifying “out of many, one.” On the reverse side, there are two French Freemasons. Charles Montesquieu was an ideological co-writer of the American constitution, his claim to fame being a champion of the idea of the separation of powers in government. Under him is Voltaire, the famous French writer and philosopher who was initiated into the Craft at the Nine Sisters Lodge in Paris by Brother Benjamin Franklin when he was ambassador to France following the American Revolution.

Such razors here described were the standard equipment of a well-groomed gentleman until the invention of the safety razor, with disposable blades invented by Bro. King C. Gillette, commissioned by the U.S. government to supply his disposable razors to members of the armed forces in World War I. Straight razors are making a resurgence in American culture as American men are increasingly discarding expensive and often inferior cartridge razors with several blades. They are again opting for high quality single-blade razors, ones which can be personalized with such embellishments as Masonic symbols! These razors stand the test of time and soon become symbols of a rite of passage as they are passed from father to son, the father giving his son his first razor as one of his first steps to manhood. Perhaps a proper acid-etched inscription could be sum quod eris—“I am what you will become.” 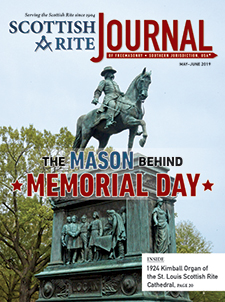 Featured Image: This straight razor from the House of the Temple Library & Museum's collection features Masonic symbols on its blade. (Photography: Elizabeth A. W. McCarthy) 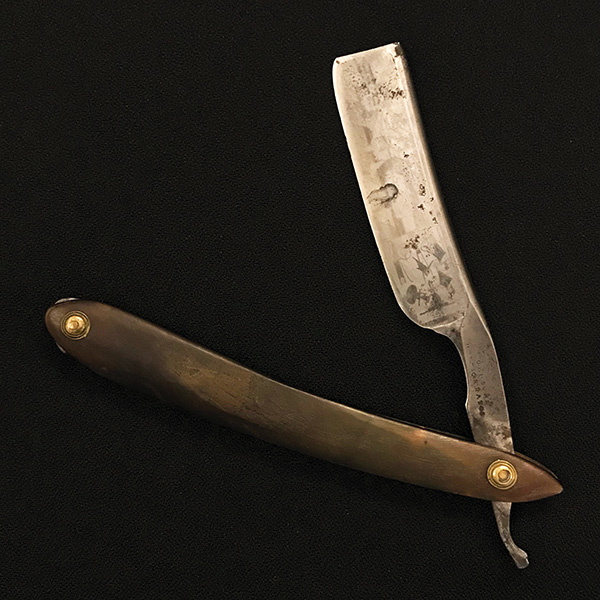