This article originally appeared in the January/February 2023 Scottish Rite Journal.

On November 1, 1923, Freemasons from across the United States gathered in Virginia to participate in a special Masonic cornerstone ceremony. They assembled in the heart of Alexandria, a city located three miles south of Washington, D.C., on the banks of the Potomac River, and marched up to Alexandria’s highest point: Shuter’s Hill. There, in front of the visiting dignitaries and the public, including Presidents Calvin Coolidge and William H. Taft, the Masons laid the first stone of the George Washington Masonic National Memorial. This remarkable moment in American Freemasonry came about through unprecedented cooperation between the state grand lodges and national appendant bodies—including the Ancient and Accepted Scottish Rite. As we mark the Memorial’s cornerstone centennial in 2023, let us take a brief look back at the prominent Scottish Rite Masons who supported this monument to George Washington, his virtues, and our own Fraternity.

Members of George Washington’s mother and affiliated lodges in Virginia, Fredericksburg Lodge No. 4 and Alexandria-Washington Lodge No. 22, made several unsuccessful attempts during the nineteenth century to develop a suitable public memorial to Washington. By 1812, Alexandria-Washington Lodge had accumulated enough ephemera related to the president that it opened one of the earliest public museums to Washington: the Alexandria Washington Lodge Museum. The Washingtoniana exhibit remained open until May 1871, when a fire destroyed the lodge hall and a significant portion of the original collection. In 1907, Charles H. Callahan, the lodge’s Senior Warden and the City of Alexandria’s Commissioner of Revenue, proposed that his Brethren undertake construction of a new fireproof temple that also would house a proper museum. The lodge agreed and sought the Grand Lodge of Virginia’s assistance to raise funds and engage with other Grand Lodges to contribute.1

On February 22, 1910, representatives from twenty-six grand lodges gathered in Alexandria to form the George Washington Masonic National Memorial Association. They set an ambitious campaign target of $1 million, or $32 million adjusted for inflation, with half going towards a new building and the rest for an endowment to fund the Memorial’s activities. Designs were drawn up for a relatively modest two-floor temple with a museum on the ground floor, while the second or top floor would house meeting space. Delegates elected the association’s board of directors and agreed to meet annually, around George Washington’s birthday, to provide regular updates on the Memorial’s progress.2

By 1922, the association abandoned its two-floor proposal for a much grander monument and brought on architect and Freemason Harvey W. Corbett from the New York firm Helme and Corbett to draft new designs.3 Corbett drew inspiration from the famous Lighthouse or Pharos of Alexandria in Egypt, one of the Seven Wonders of the Ancient World. Herb Wadsworth, 33°, expanded on Corbett’s motifs in the Scottish Rite Journal of October 1991:

The exterior of this impressive monument to our first President is based on what is known of the design of the ancient lighthouse at Alexandria, Egypt. Having gained its inspiration from this famous structure, the architect of the George Washington Masonic National Memorial proceeded to add many symbolic elements of Importance and interest to Masons. An example of this is the careful blending of all five orders of architecture: Doric, Ionic, and Corinthian, respectively, on the three exterior levels of the tower; Composite in the building’s Memorial Hall; and Tuscan in the Assembly Hall. Doric is repeated again in the auditorium and on the portico. 4

During the Supreme Council’s next Biennial Session, on October 19, 1911, the body passed a resolution to support the new Association and enroll itself in their new Roll of Honor with a donation of $100:

Be it Resolved, that the Supreme Council, Southern Jurisdiction, Scottish Rite Masons, sanction and approve the erection of the said Memorial and the formation of said National Masonic Association, recommending it to the favorable consideration of all Consistories, Chapters, and other Subordinate Bodies and individual members of the Southern Jurisdiction, Scottish Rite Masons and, by this resolution, declare this Supreme Council to be a member of “The George Washington Masonic National Memorial Association.” 6

Cowles’s fundraising efforts and committee work prompted the Association to elect him as their treasurer on February 22, 1914. He now served in this role along with his usual duties as the Supreme Council’s Secretary-General. While Association representatives continued to fundraise, they were nowhere near their $500,000 goal for a building. In 1917, Cowles reported that the Association had raised only $50,000. His report prompted Grand Commander Moore to lobby the Supreme Council for a more significant donation of $10,000, or about $230,000 adjusted for inflation, which the council approved on October 18, 1917. Moore and Cowles hoped this would spur further giving by other national bodies.7

Cowles resigned as treasurer in June 1921. J. Claude Keiper, a Past Grand Master of the District of Columbia, assumed his duties while also serving as the Association’s secretary. Keiper was a prominent leader in local and national Masonic circles. During his tenure as the District’s Grand Master in 1911, he laid the cornerstone of the Supreme Council’s House of the Temple. Keiper performed both duties so well that the Association formally elected him as Secretary-Treasurer at the next meeting on February 22, 1922. He remained in this position for the next twenty-two years, until his death on November 19, 1944. 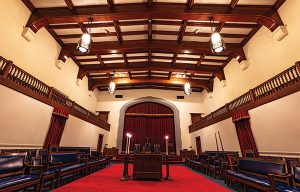 Construction progressed steadily through the 1920s even as the country experienced significant economic crises following the stock market crash in October 1929. While the Association scheduled the formal dedication ceremonies for May 1932, the Alexandria Scottish Rite bodies occupied completed rooms in the Memorial as early as 1929. A joint Scottish Rite degree conferral was performed by the Alexandria and Washington, D.C. valleys in late May 1930. To mark the special occasion, three special gavels were produced with “wood taken from the timbers supporting the original roof of the White House, removed during the Coolidge administration.”8

During its Biennial Session in October 1931, the Supreme Council approved another $25,000 donation, or $499,000 adjusted for inflation, to complete construction on the Memorial’s auditorium prior to the building’s formal dedication on May 12, 1932. While heavy rain prompted many to skip the dedication ceremony, Grand Commanders Cowles and Frederick B. Stevens, of the Northern Masonic Jurisdiction, both attended the ceremony along with other visiting Scottish Rite Masons including the Valley of Washington, D.C.’s Albert Pike Camp Guard. President Herbert Hoover also attended the dedication ceremony held in the completed auditorium. Since then, countless Scottish Rite Masons from across the United States have visited the Memorial and contributed regularly toward the Memorial’s activities.9 Since its inception, prominent Scottish Rite Masons have made great contributions to the Association’s efforts to build a lasting monument to George Washington and Freemasonry. The landmark serves as an early example of effective cooperation between state grand lodges and national appendant bodies like the Ancient and Accepted Scottish Rite.

In 2023, Masons will gather again from all over to witness the re-dedication of this cornerstone. On Monday, February 20, Masons will march in the City of Alexandria’s annual Washington’s Birthday parade and, afterwards, the Grand Lodge of Virginia will re-enact the cornerstone ceremony on the Memorial’s front steps. All are welcome to join in the celebration. To register or to see the complete schedule of cornerstone centennial events, see the Memorial’s website at https://gwmemorial.org/.

Photo: The George Washington Masonic National Memorial in autumn foliage. The beauty of nature and the soaring aesthetics of sublime architecture complement each other in this stunning scene. Photography: Joshua Mongardini 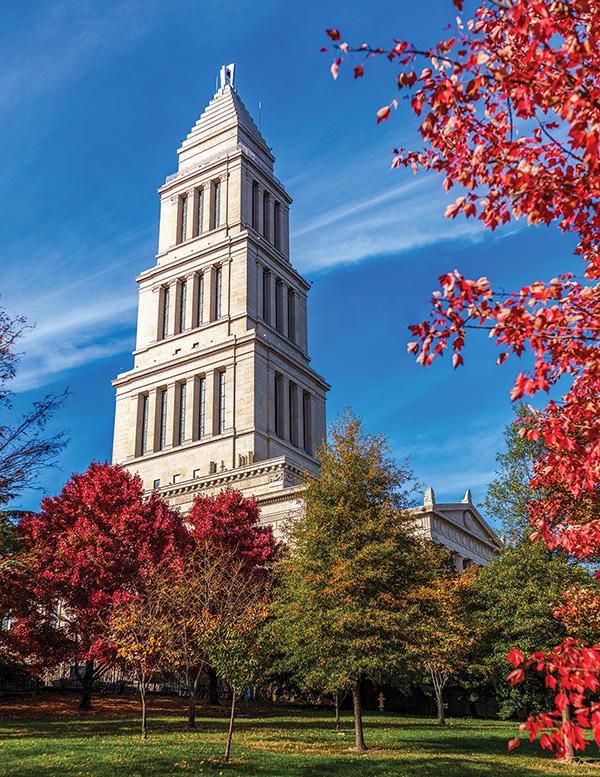