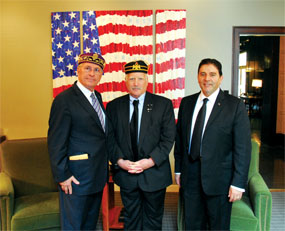 On the night of my initiation into Freemasonry, I said that I’d been a Mason since I was twelve. It was not a joke, but a statement of fact. For as long as I can remember; I had hoped that one day I would become a member of this fellowship. I knew that the Secret of Freemasonry was no secret, that Free Masons stood for

Bro. Akram Elias was patient with a twinkle of constant enjoyment as he watched and waited for me to get where I was meant to be. When it was done on June 10, 2011, I can’t express how deeply I felt the rightness in joining with a society that valued ideas that I valued—ideas I knew were the shared ideas of the creators of the nation and were visible from any point in the Capitol.

The Scottish Rite Degrees spell out quite clearly the duties of a Freemason in safeguarding a democratic republic like ours by nurturing the values, principles, and ideals upon which this Great Experiment was founded. I believe the time has come for every concerned citizen in this country—more especially Scottish Rite Masons—to stand up and be counted among those who will play an active role in rescuing our democratic republic.

My brothers of the Craft, America is in crisis. Our nation’s civic culture is in danger of vanishing during our current generation. All is at risk that allows us to share public space with those with whom we disagree, that allows us to interact with one another with civility, and that provides us with the ability to form viable communities. We are losing our common frame of reference as a people and our national identity.

One does not need to spend more than a few minutes watching or reading news to see the decline. Politicians of every stripe pander to micro-niches in the electorate instead of governing for the greater good. Governing has taken a back seat to perpetual campaigns. A hyper-partisan prism filters facts and polarizes even mundane matters. Cynicism rules the day. The traditions and skills that allow citizens to hold power accountable are on the wane.

This tragic state of affairs exists because, as a people, we have forgotten our founding principles, the founding documents, and context for them. We no longer teach citizenship to our young. Knowing the facts of governing, and mastering the skills of governing, are being lost. Where are our children expected to learn how to run the country and preserve its values when those classes meant to teach those very skills are removed from their sight?

This unraveling of America’s civil culture has taken many years and many forms. There are many sins of omission and commission by leaders across the political spectrum. As a concerned citizen, I established The Dreyfuss Initiative to reweave and revitalize America’s civic culture, not to assign blame for its current state.

We have created three endeavors that linked together are the first coordinated, cohesive assault on the darkness of thoughtlessness, senselessness, and selfishness. The greatest of them is a partnership with the one name more associated with the values of this nation than any other.

Understanding the principles that guide our nation and how they evolved is fundamental to perpetuating our civic culture. The GWITE will be a global center for scholarship, discussion, dissemination, and preservation of the documents, history, and principles of the Enlightenment.

GWITE will focus on understanding how this pivotal era in world history formed America’s system of government and influenced all democracies. Its scholarship, conferences, and seminars will illuminate the Enlightenment’s foundational principles and preserve them for future generations. Civic and business leaders, scholars, and young people all need to see that the Enlightenment is just as relevant in the 21st century and it was at our founding.

Reengaging the arts is a key element to our civic revitalization. It is time to bring the fostering of our national identity back to center stage. All the civic skills and talents for illustrating American values and discovering the wealth of great drama in our national story will be for naught unless we prepare a way from the classroom to the culture. It is for this that the second leg of our endeavor is created.

An American History Play Competition is being formed within the League of Regional Theaters. Playwrights and theater companies will present plays that focus on an event, person, or place in American history. Plays can be about the history that was or might have been. They could take place in a future America, illustrating the consequences of a prior event or decision. At the end of each season, writers and their host theaters will compete for a Prize for Excellence that will be represented in a check of about $300,000. The prize money will be allocated 70 percent to the playwright and 30 percent to the theater company. The first cycle of eligibility will be for new works produced and performed among the League of Regional Theaters from September 2012 to June 2013.

Most urgently, we must prepare the next generation for becoming sovereigns of their government and stewards of their nation. The Curriculum Enhancement Project will develop, disseminate, and support new learning modules, suggested activities, and materials for preparing young people to become effective and engaged citizens.

The Dreyfuss Curriculum will offer tools for creating an agile mind. Learning modules, materials, and resources will focus on reason, logic, clarity of thought, clarity of expression, critical analysis, values of debate, dissent and civility, rumination and contemplation, and ethics. The curriculum is designed to support the Common Core Standards and the national standards for Social Studies and English Language Arts.

Curriculum materials will nurture in our youngest a lifelong patriotic bond to the singular design of this nation with glory tales and mythology. As their brains develop more complex capabilities they will be introduced to concepts of reason and logic, exercises of dissent, and debate, all in the service of honing the intellect to clarity of thought and expression. Older students will use context, detail, and differing opinion as tools to sharpen their mind regardless of subject. When the necessary maturity of mind is reached, they will practice critical analysis on the subject of our political system, so that before high school graduation they will all share a sense of ownership, pride, and realism imbued with the skills that will serve them throughout life. The Dreyfuss Initiative is partnering with major universities for the joint development, dissemination, and support of this program.

My brethren, this is a pivotal moment for the nation. These programs are the first of many steps that will be needed to bring America back from the brink. I invite you to share your ideas and resources in order to forge an effective and lasting solution to America’s most complex issue—its survival as a viable civic culture. Being a Soldier of Light is not only an honor; it is most importantly a call to duty and demands sacrifice for the cause in which we are engaged.

Bro. Richard Dreyfuss, 32°, became a Mason June 10, 2011, and is a member of the Valley of the District of Columbia. He is an Academy-Award-winning actor and founder of The Dreyfuss Initiative.