MEMBER LOGIN
We are now open for visitors & tours! Please check out our “Planning Your Visit” page for more information. ** Per the July 29, 2021 Mayor’s Order, masks are now required for everyone—regardless of vaccination status—in indoor public settings in Washington, D.C. ** 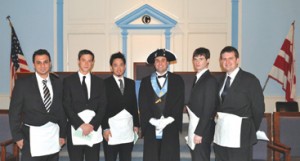 To many, the idea of membership in a Masonic Lodge predicated on affiliation with a specific university might sound new and novel. However, the history of university lodges is as old and historically rich as that of the Craft itself. In fact, the joining of a Masonic lodge to an academic institution is a natural fit, since both seek to educate and instruct their members. Universities instruct on the intellectual level and give their attendees the tools necessary to succeed in their professional life and better serve their community. Masonry instructs its members on the personal level, by leading its initiates towards introspection and self-attainment.

Academic Lodges in the British Isles

England has always placed a great deal of importance on academic lodges. As students of the “Authentic School” know, Craft Masonry historically dates back to 1717 and the foundation of the Grand Lodge of England. But it’s probably a surprise that, while next to nothing is known about it, the first recorded reference to a university-affiliated lodge dates back to July 1688 at the University of Dublin.1 Another early example, University Lodge No. 74 met in London for six years (1730–1736) and counted among its members the eminent Natural Philosopher and third Grand Master of the Premier Grand Lodge of England, Dr. J. T. Desaguliers.2

Furthermore, academic lodges have always held a unique place in the United Grand Lodge of England (UGLE), receiving such special permissions as waiving the age-limit of 21 to allow the initiation of young undergraduates and recently halving the Grand Lodge dues of those under 25 to make Masonry more accessible to university students.3 It is worth noting that—reflecting the social stratification of the 19th century—Masonry was initially meant solely for the upper classes, even in a university setting. Initiation fees for Apollo University Lodge No. 859 at Oxford in the 1820s equates to present day $330 USD, before yearly dues.4

To date, Apollo University Lodge No. 859 alone has initiated a total of 3,259 Brethren into the Craft. The UGLE says there are 28 other academic lodges under its jurisdiction, and in 2005 even created the “Universities Scheme”—which is headed by the Assistant Grand Master—with the purpose of “establish[ing] and/or enhanc[ing] arrangements and opportunities for undergraduates and other university members to enjoy Freemasonry.”5

Given this rich history, it is strange that an academic lodge did not find its way to America until December 15, 1920, with the foundation of Richard C. MacLaurin Lodge at the Massachusetts Institute of Technology (Bro. MacLaurin was a mathematical physicist and President of MIT, 1909–20). This was quickly followed by the consecration of The Harvard Lodge on May 18th, 1922. These two along with Boston University Lodge, constituted in 1926, were the only American lodges with any academic affiliation until after WWII when Sul Ross Lodge No. 1300 was consecrated in 1947 at College Station, Texas. (Bro. Lawrence Sullivan “Sul” Ross was President of the Agricultural and Mechanical College of Texas, now Texas A&M University.)

The downward membership trends of the mid-to-late 20th century were mirrored equally, if not more so, in academic lodges due to an itinerant population that is often only able to attend lodge for the four-year window that they are pursuing their undergraduate studies, as well as the extreme demands every student has due to their wide range of commitments.

Fortunately, in the 21st century, young college students across the country are beginning to see the difference between campus groups, such as Greek-letter fraternities, and the Craft. The Harvard Lodge alone saw an increase in its membership from 70 to 280 from 2001–2005.6 It is encouraging that this is not unique. In the mid-Atlantic region alone, lodges are in the process of being organized at Johns Hopkins University in Baltimore, Maryland and George Mason University in Fairfax, Virginia.

The George Washington University was founded in 1821 as the Columbian College in the District of Columbia using funds set aside by George Washington to create “an institution in the nation’s capital dedicated to educating and preparing future leaders.”7 Today, there are over 20,000 students from every state and 130 countries. Located just four blocks from the White House, it is fitting that the 2009 Princeton Review ranks GWU as second in the nation for “Most Politically Active Students.”

The Colonial Lodge No. 1821, named after the University’s “Colonials” sports teams, was consecrated and received its charter in the District of Columbia on November 11, 2009. Founded by a group of alumni and faculty with strong ties to local Masonry and strong support from the Grand Master, The Colonial Lodge meets quarterly.

Aside from being named after America’s most famous Freemason, it’s notable that Freemasonry and the Scottish Rite have deep historical connections to the George Washington University. For example, Rice Hall which houses the University’s administrative offices, including the president’s office, is named for Luther Rice, a Mason and Baptist Minister who originally conceived the idea for the University. Three of the last five of the University’s presidents have been Masons, including President Emeritus and Colonial Lodge member Stephen Joel Trachtenberg, 33°, G.C. A gift of $1 million by the Scottish Rite in the 1928 created the University’s School of Government, and there have been Masonic cornerstone laying ceremonies for at least five University buildings, including in 2003 for the Elliott School of International Affairs. Masonry is also responsible for the Wolcott Foundation, created by the High Twelve International, for undergraduate and graduate scholarships to the University.

A common narrative to explain Masonry’s declining membership is that there are too many distractions in the modern world for Masonry to compete with, which if true, is doubly so for an academic lodge that is forced to compete for the attention of an already very active student community. In order to win and keep that attention, the lodge needs to offer the candidates and members something that they could not experience anywhere else. While there is always competition for the interest of any university community, not only from Greek-letter fraternity life, but also from other student and alumni organizations and university study itself, Bro. Ned T. Sahin of The Harvard Lodge explains, “While they all offer camaraderie and group identity, our Craft is distinguished in many ways. For instance, it aims to inspire a lifetime of personal moral betterment and benevolent impact on society, through scholarly, allegorical, and symbolic lessons.”8 In the Colonial Lodge, this is provided through strong ritual work and an emphasis on the educational aspects of Masonry, along with a safe forum where students, professors, and alumni can meet “on the level.”

In fact, The Colonial puts a very strong emphasis on emulating what would usually be called “Traditional Observance” Masonry. For example, a chamber of reflection is conducted for the candidates before their Master Mason degree, meetings and degree work are followed by a table lodge that uses a ritual that members adapted especially for themselves, and a high standard of ritual is expected from every degree the Lodge confers. Members also wear their academic robes at the lodge’s communications to emphasize its identity as an academic lodge.

The reason for these practices isn’t simply to conform to traditions for the sake of it, but because Masonry and its degrees should be taken seriously to ensure that Masonic ritual becomes a profound experience for the initiates, and so that the rest of the membership will continue to experience Masonry at a high level. But perhaps Bro. Douglas Knoop sums it up better writing in Ars Quatuor Coronatorumhttp://www.gwu.edu/explore/aboutgwhttp://www.gwu.edu/explore/aboutgw: “I am of the opinion that a university lodge should be a lodge of instruction in a much wider sense, by teaching its young initiates not only how lodge ceremonies should be conducted, but by giving them some acquaintance with the real history and underlying principles of the Society of which they have so recently become members.”