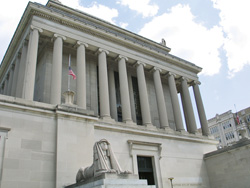 Photo: The House of the Temple sits at the intersection of 16th & S Streets in Washington, D.C. (Elizabeth A. W. McCarthy, The Scottish Rite Journal)

“House of the Temple” are the first four words of the prologue of the book. Yes, THAT book—The Lost Symbol. The novel’s opens and reaches its climax in the headquarters building of the Supreme Council of the Scottish Rite, S.J.

A thriller set in Washington, D.C., The Lost Symbolis the third Dan Brown novel to involve the character Robert Langdon, the Harvard University symbologist. The book sold one million in hardcover and e-book versions in the US, the UK, and Canada, on its first day, making it the fastest selling adult novel in history.

The Lost Symbol has changed life as we have known it at the House of the Temple. So what? Some author guy included a few words about the building in a book. If you are thinking “so what”—well, this has actually turned out to be a big deal! Since the book was released on September 15, 2009, our tours have quadrupled in number. And, they continue to increase. Yes, the book has definitely changed our tours.

How’s that? Well, for one, our tours now highlight the places Brown mentions in his book, that is, except for the bathroom! Additional tour guides have been added to the part-time staff to manage the influx of guests. Special tours have been created by professional companies throughout the city to shepherd visitors around sites found in Brown’s book. We remain the number one Masonic “must see” spot on any Masonic tour of Washington.

Since the book was published, the question I seem to be asked most frequently is whether or not Brown’s descriptions of the House of the Temple are accurate. So, let’s cover some of these “facts” for you.

House of the Temple

“The colossal edifice, located at 1733 Sixteenth Street NW in Washington, D.C., was a replica of a pre-Christian temple—the temple of King Mausolus, the original mausoleum.…” (p. 3)

Fact: The architectural design for the building was, indeed, inspired by the famed Mausoleum at Halicarnassus, one of the Seven Wonders of the Ancient World. Constructed between 1911 and 1915 and designed by famed American neo-classical architect John Russell Pope, the House of the Temple sits a mile north of the White House on the corner of Sixteenth and “S” Streets, N.W.

Exterior of the Building

Fact: Two marble sphinxes seemingly guard the entrance of the building. The one on the right of the door (with its eyes half closed) is a symbol of Wisdom. The one on the left (with its eyes open and alert) is a symbol of Power. Adolph A. Weinman was selected by the Supreme Council’s Executive Committee to be the sculptor for the sphinxes. Each sphinx weighs 17 tons and was carved out of a solid blocks of limestone delivered to the building site in 1913.

Fact: It is true, the atrium has eight green columns made of Windsor granite, each weighing 24 tons. The black statues are actually Egyptian figures. These were originally made of plaster, but in 1929, they were replaced by marble statues, considered more appropriate for the brilliant space. Carved by Weinman (the same man who carved the outside sphinxes), they sit on each side of the Grand Staircase. These guardians were carved from a solid piece of black marble which was quarried on the shores of Lake Champlain. (By the way, it took fifteen years to find this marble and they were carved in the room.)

The atrium lamps, featuring the head of Hermes, the messenger of the gods, are bronze and topped with alabaster bowls. The chandeliers have Greek figures surrounding large alabaster bowls. Medallions feature the symbols of several degrees of the Scottish Rite, including the 14th, 18th, 29th, 30th and 33rd (a double-headed eagle, not a phoenix). 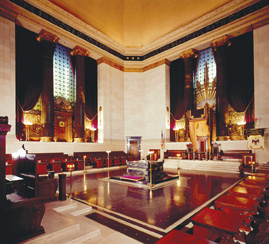 Photo: Temple Room of the House of the Temple (J. Alexander)

“The room was a perfect square. And cavernous. The ceiling soared an astonishing one hundred feet overhead, supported by monolithic columns of green granite. A tiered gallery of dark Russian walnut seats with hand-tooled pigskin encircled the room.” (p. 4)

Fact: The room is a square (61 by 61 feet), but it’s actually 88 feet tall. There are eight Ionic columns made of green Windsor granite with solid bronze caps and bases, two on each side of the room. Desks and chairs parallel the altar on the north and south sides of the room, while the organ and the Grand Commander’s chair are on the other sides. These are made predominantly of walnut (but not Russian) with brown dyed pigskin and gold inlay. Officers of the Supreme Council sit at these desks when meetings are held. Members of the organization sit in the long oak benches behind the desks.

To Enter the Building

“The front doors are sealed from within … the building’s rear entrance is your only way in. It’s got a keypad with an access PIN known only to the brothers.” (p. 426)

Fact: True, the front doors do seal from within. But, the front entrance to the building actually has triple sets of doors. On the outer part of the building, there are large, heavy bronze doors, each with a lion’s head in the center, which really do lock from the inside. Once inside, there are two additional sets of doors which separate the atrium from the vestibule. Originally, there were leather covered wood doors towards the west or outside, which have now been replaced with glass and bronze doors, sidelights, and a transom. A double door has been set inside bronze grillwork which serves as the final set of doors. And, yes, the backdoor really does have a keypad security feature with an individual access PIN for each employee. Members do not have an access PIN, only employees.

“The interior was an ornate labyrinth of ritualistic chambers, halls, sealed vaults, libraries, and even a hollow wall that held the remains of two human bodies.” (p. 4)

Fact: In 1944 and 1953, special Acts of the United States Congress allowed the remains of Albert Pike and, later, John Henry Cowles to be placed in vaults in the House of the Temple. Both men served as Sovereign Grand Commander of the Supreme Council. Memorial busts of Pike and Cowles, each on a marble pedestal, were added at that time.

Fact: The staircase is one of the most beautiful spots in the building. The steps are made of white marble and divide into two side runs to reach the landing in front of the Temple Room. Once you get to the Grand Staircase landing, there is a bronze bust of Albert Pike on a pedestal installed in the biennium of 1957. Above the bust is the quote, which was carved into a limestone panel and inserted into the wall during the biennium of 1921.

“The library in the House of the Temple was D.C.’s oldest public reading room. Its elegant stacks burgeoned with over a quarter of a million volumes, including a rare copy of the Ahiman Rezon, The Secrets of a Prepared Brother. In addition, the library displayed precious Masonic jewels, ritual artifacts, and even a rare volume that had been hand-printed by Benjamin Franklin.” (p. 466)

Fact: In the 1880s, the library was the only free public library in the District of Columbia. At that time, the Library of Congress was located in limited space in the Capitol building, and its collections were not organized for any extended public use. The only other libraries were private collections or restricted collections at educational institutions. The library has one of twelve known copies of Benjamin Franklin’s The Constitutions of the Free-Masons (Philadelphia: 1734), which is the first Masonic book printed in America and is also the first song book printed in America. The library does have copies of Ahiman Rezon. 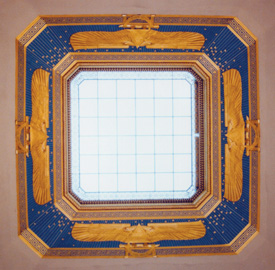 “You say the Temple Room is at the top?” Langdon nodded, pointing all the way to the pinnacle of the building. “That flat area on top of the pyramid is actually a skylight.” Simkins spun back to Langdon. “The Temple Room has a skylight?” (p. 450)

Fact: Indeed, one of the highlights of the Temple Room is the skylight. The domed ceiling soars nearly 100 feet above the altar, flooding the room with light. An interesting fact is that on January 19, 1956, there was a fire in the Temple Room, which left the room in need of several repairs. In addition to installing a new skylight, the gold leaf around the intersection of the skylight was cleaned and repaired and the dome painted. Hopefully a helicopter won’t decide to land nearby anytime soon!

“In the silence of an elegant bathroom on the ground floor of the House of the Temple, Robert Langdon ran warm water into a tile sink and eyed himself in the mirror.” (p. 464)

Fact: This bathroom really is fancy! Your tour guide probably won’t include this on the tour, so I will describe it for you. The vestibule of the men’s restroom has a gray terrazzo floor, while the remainder of the room is currently carpeted. Gray marble walls reach approximately 7 feet above the floor in both areas, with painted plaster above. A stained wood door in the west wall opens to a closet. Ceilings are painted plaster with both segmental and barrel vaults.

The Hall of Honor

“Langdon exited the bathroom and wound his way along the curved wall of the Hall of Honor—a gracefully arched passageway, lined with portraits of accomplished Masons … U.S. presidents, philanthropists, luminaries, and other influential Americans. He paused at an oil painting of Harry S. Truman and tried to imagine the man undergoing the rites, rituals and studies required to become a Mason.” (p. 464)

Fact: The Truman painting is real! An original oil portrait of President Harry S. Truman, 33°, donated by the Scottish Rite Foundation of Missouri in 1990, was the premier painting installed in the Hall of Honor.

The Rest of the Story

“The House of the Temple—known among its brethren as Heredom—had always been the crown jewel of the Masonic Scottish Rite in America. With its steeply sloped, pyramidical roof, the building was named for an imaginary Scottish mountain.” (p. 423)

Fact: Why, you ask, are these “The Secrets of Heredom?” The answer is that the word Heredom may derive from the Greek words Heiros-Domos (the Holy House), a definition which Professor Langdon discovered on the internet, using his BlackBerry, of course! Although the book says the first hit was an encyclopedia entry, this definition was actually written by our own Masonic scholars, Arturo de Hoyos and S. Brent Morris, and has been used since by the Scottish Rite Research Society in its annual volume, Heredom.
The House of the Temple was John Russell Pope’s first major commission in the District, and was hailed as a masterpiece. This led to his subsequent commission by the Federal Government resulting in his designing of the National Gallery of Art, the National Archives, and the Jefferson Memorial. Standing in the 16th Street Historic District, the House of the Temple “… was among the first group of buildings to receive an individual listing in the D.C. Inventory of Historic Sites on November 8, 1964.”

So, have you read the book yet? If so, why don’t you plan on joining us in Washington to see this architectural masterpiece for yourself? We welcome you to come see what Dan Brown used as a magnificent inspiration for his best-selling novel.