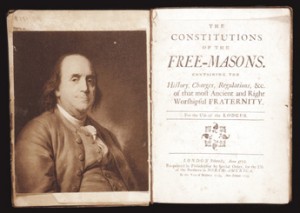 (Photo: From the Library and Museum of the Supreme Council, 33°, S.J., Washington, D.C.—Franklin’s portrait not part of original book)

The seeds of our republic were planted with the ideas of Freemasonry. Dr. Benjamin Franklin, provincial grand master of Pennsylvania, orchestrated these historic actions when he proposed the Albany Plan of Union in 1754, which held an identical philosophy of confederation to that which united the American provincial grand lodges of the time.

Bro. Franklin was then 48 years young; James Madison was three years old; Thomas Jefferson had just celebrated his tenth birthday; and Alexander Hamilton was not yet even conceived. When they were of age, none of these men, with the exception of Brother Franklin, were known to have been Freemasons. (There have been speculations that Jefferson was a Mason, but historians dismiss this conjecture since there is utterly no documentation.) Still, they were fully informed of the motivating philosophy of the fraternity through the momentous work of Rev. Dr. James Anderson’s Constitutions of the Free-Masons (1723), which was reprinted in 1734 by Franklin and widely distributed in colonial America.

These constitutional planners agreed upon a scheme that guaranteed religious liberty for the other colonies. This compromise was an assurance for not only Protestant Christians but also Catholics, Jews, and others. Such religious tolerance has always been a fundamental tenet of the Masonic philosophy of equality, universal brotherhood, and E Pluribus Unum (out of many, one).

Franklin’s Albany Plan did not produce the cooperation needed among the colonies. Yet Bro. Franklin was determined to harness unity and collaboration from the delegates. Accompanying an editorial column in his Pennsylvania Gazette, Franklin published a symbolic picture portraying a snake divided into eight segments, each portion labeled with the initials of the existing colonial governments, and the caption: “Join, or Die.”

The snake or serpent in the woodcut drawing (signifying one of the three large constellations of Draco, Serpent, or Hydra) has a head (indicating the dragon head or the North Node in astrology and Franklin’s Poor Richard’s Almanac) and a tail (representing the dragon tail or the South Node). In the eighteenth century, it was a popular superstition in colonial America that a serpent cut in two would come to life if the pieces were joined before sunset. The image captured the public imagination instantly when the cartoon-like drawing was reprinted with minor variations in the New York Mercury, the Virginia Gazette, the Boston Evening Post, and elsewhere, making it the most famous political cartoon in American history.

Even though Franklin tried to galvanize the public opinion, the independent-minded colonial assemblies did not adopt the Albany Plan because it was too liberal and radical for the time. Surely, this wise Masonic visionary foresaw the revolution that might be needed to remove the colonial infrastructure to secure peace and unity.

Intellectual momentum for the Albany Plan clearly derived from Anderson’s Constitutions of the Free-Masons, which outlined a federal system—an “orderly, balanced, and enlightened” mechanism—that would “eventually form the basis for a unified American nation,” according to Walter Isaacson, a meticulous biographer of Franklin. This system mirrored that of the Masonic framework of governance in which the provincial grand lodge administered the broader scheme for general affairs of the community of Freemasons, while independent lodges adhered to the established order of by-laws under Anderson’s Constitutions in the colonies. The basic principles of governance employed in Freemasonry include:

The striking similarities between the Masonic Constitutions and the Articles of Confederation, the U.S. Constitution, and the Bill of Rights display a revealing connection that has been hardly recognized or explicitly advertised (this is one of Freemasonry’s “public secrets” that has agitated fundamentalists and conspiracists alike).

Referring to the Albany Plan, Isaacson writes, “Franklin put forth the idea again in a proposed draft for Articles of Confederation” in 1775. This draft “contained the seeds of the conceptual breakthrough that would eventually define America’s federal system: a division of powers between a central government and those of the states,” the biographer of Franklin concludes.

Historian Thomas Burke at the New York State Commission also confirms that “Benjamin Franklin proposed a plan of confederation also based on the Albany Plan” at the Continental Congress in 1775. Burke further reveals that “some of the basic concepts of the Albany Plan were attained at the Constitution Convention” at Philadelphia in 1787. For example, a system of checks-and-balances, which was embodied in the Albany Plan, remained an integral part of our federal system as well as the separation of church and state while promoting religious freedom.

Though Freemasonry had grown in popularity throughout the thirteen colonies, it was not the right time for the nation to form a union to solidify this brotherhood-type government. Yet Brother Franklin was confident that a network of lodges practicing the same principles and Masonic-educated brethren at the community level were prepared to act in unison. At the end of his life, Franklin was still convinced that the approval of his Albany Plan would have prevented the Revolutionary War and created “a harmonious empire,” Isaacson confirms. In his own Autobiography of Benjamin Franklin, the Albany planner writes:

The different and contrary reasons of dislike to my plan makes me suspect that it was really the true medium; and I am still of opinion it would have been happy for both sides the water [Atlantic] if it had been adopted. The colonies, so united, would have been sufficiently strong to have defended themselves; there would then have been no need of troops from England; of course, the subsequent pretence for taxing America, and the bloody contest it occasioned, would have been avoided. But such mistakes are not new; history is full of errors of states and princes.

The politics of reality in the mid-eighteenth century was not as dangerous and eminently volatile as they were a quarter century later. The highly perceptive and farsighted Franklin was ahead of his time and determined to devise a gamut of diplomatic and political measures against the hostile French in Canada (and Ohio Country), the Dutch in New Amsterdam (New York), and even the Spanish in Florida.

Brother Franklin’s unyielding determination to create a union had certainly been influenced by the ideas of Anderson’s Constitutions and the influence of Enlightenment thinkers, especially Sir Francis Bacon’s New Atlantis. The entrepreneurial and missionary zeal of Franklin was also proven by his dedication to Masonic craft and devotion to liberal education for a more equitable and democratic society.