The George Washington Masonic National Memorial Association will celebrate its 100th Anniversary on February 22, 2010. This day commemorates the historic first meeting and founding of the Association. At the invitation of MW Joseph Eggleston, Grand Master of Virginia, grand masters from all across the United States met at Alexandria-Washington Lodge No. 22 above Alexandria City Hall on February 22, 1910, for the purpose of creating an association to build a suitable memorial to George Washington, the Mason. The Memorial Association was founded, plans were approved, and the Memorial would be built on the highest hill in Alexandria, Virginia.

In honor of the centennial, the Conference of Grand Masters of North America, hosted by the Grand Lodge of Virginia, will be held in nearby Arlington, Virginia, and conference delegates will attend the Association’s Annual Meeting and other events at the Memorial on February 22, 2010, George Washington’s 278th birthday. At the meeting, a new portrait of George Washington as a Freemason will be unveiled. The portrait, by Virginia artist Christopher Erney, was commissioned by the Memorial Association and will present a new interpretation of Washington. Prints of the portrait will be available at the meeting.

Following the Annual Meeting, the International Order of DeMolay will rededicate the colossal bronze statue of George Washington in Memorial Hall and recognize and reaffirm the role of the young men of DeMolay in Freemasonry. The statue was a gift to the Memorial from the DeMolay, and 2010 marks the 60th anniversary of the unveiling of the statue by President and Past Grand Master Harry S. Truman, 33°. After the rededication, the Grand Masters will assemble on the front steps of the Memorial for a group portrait, and will also have individual photographs taken with the trowel and gavel used at the 1793 cornerstone laying of the United States Capitol by George Washington and with the Bible on which Washington took his Masonic obligations. 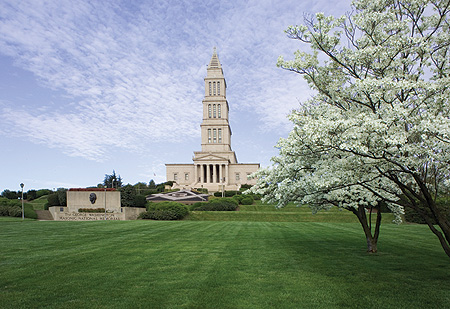 Also during the celebration, the “White House Stones Exhibit” will be inaugurated. Each stone in the exhibit is marked by one of the Scots Masons who helped build the White House in the 1790s. The stones were discovered when the White House was restored during the presidency of Harry S. Truman in the late 1940s. Under the direction of President Truman, the stones were labeled and one was sent to each of the United States grand lodges and other Masonic organizations. The exhibit reassembles many of these historic stones. Also included in the Exhibit is the first minute book from Federal Lodge No. 1 of the District of Columbia founded in 1793 by the Scots Masons on the grounds of the White House. The exhibit is sponsored by the Scottish Rite Valley of Washington, D.C., and by the Grand Lodge, F.A.A.M., of the District of Columbia.

A gala reception will be held in Grand Masonic Hall and an entertaining program is planned for the ladies while the annual meeting is taking place. Several commemorative gift items will also be available and on display.

In addition, as part of the celebration, artist Christopher Erney also created an updated, more intricate design of the current Association logo that combines the Washington Family Crest with numerous Masonic symbols. The new logo affirms the Association’s motto, “In Memoriam Perpetuam,” as it supports Freemasonry in a new century of service.

The Memorial looks forward to celebrating 100 years of dedication to Freemasonry’s greatest brother and honoring the countless brothers who built and currently sustain the Memorial. Equally important, 2010 marks the passage into a second century of fulfilling the Association’s mission: “To inspire humanity through education to emulate and promote the virtues, character and vision of George Washington, the Man, the Mason and Father of our Country.”

On November 1, 1923, the Memorial’s cornerstone was dedicated in a Masonic ceremony. President Calvin Coolidge, former President and Chief Justice William H. Taft, and numerous other dignitaries performed the ceremony before a crowd of thousands of Freemasons from around the nation. The onset of the Great Depression did not stop work on the Memorial. For over ten years, Freemasons steadily and faithfully contributed to the construction of the Memorial. On May 12, 1932, the bicentennial year of George Washington’s birth, the dedication of the Memorial took place with President Herbert Hoover participating. 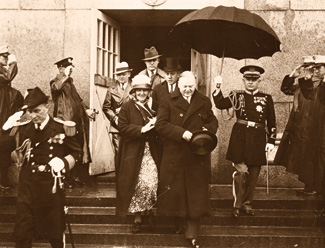 Photo: President Herbert Hoover participated in the dedication of the Memorial on May 12, 1932, the bicentennial year of George Washington’s birth.

After World War II, work on the Memorial’s interior began in earnest. By 1970, the George Washington Masonic Memorial was completed. In 1999, the large Square and Compasses were added to the front lawn, a visible sign of the Masonic nature of the Memorial. For the past few years, in anticipation of the 100th Anniversary, the Memorial has undergone extensive renovations. The beautiful George Washington Museum was completely refurbished through the generous support of the Scottish Rite of Freemasonry. Several new exhibits have also been added including “The Form and Function of American Freemasonry” which highlights four great American Freemasons: Washington, Franklin, Jackson, and Truman, and “The Golden Age of Masonic Architecture,” an exhibit of framed color prints of great Masonic buildings from around the country built during the same period as the Memorial.