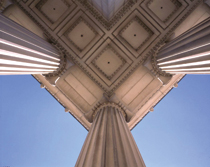 The House of the Temple is a major work by a well-known architect, a prime example of an important period of American Architecture, a prominent building in the nation’s capitol, an important part of Masonic history, and has been recognized throughout its 100 years as a significant building. This article will examine those factors for its exemplary stature among buildings. Another reason for its significance is the inclusion of Masonic signs, symbols, and ideals in the building’s design; this topic is worthy of a separate article but will be briefly examined.

When it began considering designs for a new headquarters building in Washington around 1910, the Supreme Council, 33°, S.J., sought “the most elegant, stately and superb [home] ever built for Scottish Rite Masons,” a building that would compare favorably with the best architecture of the federal government in the Nation’s Capital.”1 To accomplish this purpose, the Council selected John Russell Pope, just then becoming known for his monumental and memorial designs, as its architect. The House of the Temple was Pope’s first large monumental commission in Washington, an accomplishment that led to later works such as the National Gallery of Art (West Building), National Archives, DAR Constitution Hall, and the Thomas Jefferson Memorial. The temple was also one of Pope’s best-known and most highly praised works, earning awards and appreciation in national and international publications. The London Architectural Review noted that, “this monumental composition may surely be said to have reached the high-water mark of achievement in that newer interpretation of the Classic style with which modern American architecture is closely identified.”2

In recent years, Pope’s work has been reconsidered, and two career retrospectives (one on his residential work, one on his complete works) have been staged in the last ten years. Steven Bedford, author of a recent book on Pope’s work, notes Pope’s “unrivaled” handling of materials and “unquestioned” ability to design “dignified, refined, and functional structures,” and calls him “the quintessential American classical architect of the first part of this century.”3 A further understanding of the value placed on his work can be seen in the number of buildings designed by Pope included in the National Register of Historic Places. Nearly two-dozen works, mostly on the east coast, are listed in the register. In Washington, D.C., alone, nine of the architect’s buildings, five residences and four public buildings, have been designated.4 As mentioned previously, the House of the Temple represents Pope’s earliest large-scale monumental design in Washington and “established his reputation for great skill in the design of monumental buildings.”5

Based on the Tomb of King Mausolus at Halicarnassus, a fourth-century bc building included among the Seven Wonders of the Ancient World, the temple is an excellent example of American Classical Revival architecture of the early twentieth century. The Classical Revival in the United States was a branch of the American Renaissance of the late-nineteenth and early-twentieth centuries, during which architects sought a thorough knowledge of historical precedents, including earlier American buildings, on which to base contemporary designs. American Classical Revival architecture became increasingly popular after the World’s Columbian Exposition in Chicago in 1893, the buildings of which were designed in Classical and Renaissance styles by some of the best-known architects of the time. The exhibition halls of the exposition illustrated the potential for Classical and Renaissance precedents to provide models for contemporary building types in the United States.6 The architecture of history’s great powers was also considered appropriate for a country of increasing global influence. As Bedford points out, the American Renaissance strove for “complicated, eclectic, and carefully calculated appropriation of European form, predominantly Classical and Renaissance form, as an expression of the new image of America as a world power.”7

Some of the most respected architecture firms of the turn of the century, including McKim, Mead & White, Daniel Burnham, and Carrère and Hastings, practiced this manner of design, as did Pope, who was educated at the École des Beaux-Arts in Paris and the American Academy in Rome. In the design of the House of the Temple, Pope adhered to the tenets of the American Renaissance approach to design by synthesizing a number of specific, in this case, Greek, precedents to produce an integrated and coherent whole. As mentioned earlier, the House of the Temple was described by the British journal Architectural Review as the epitome of American design in this manner, and Fiske Kimball and Sir Banister Fletcher both used the building as an illustrative example of American Classicism in their architectural surveys published in the late 1920s.8

The contract with Pope was signed in April 1910. By early September 1911, the work had progressed far enough that the Supreme Council made plans to set the building’s cornerstone during its biennial session that fall. Using the Bible, candlesticks, trowel, and gavel employed by George Washington when he laid the cornerstone of the U.S. Capitol in 1793, the cornerstone for the House of the Temple was laid on October 18, 1911. With few significant additions or changes to the building since its completion and retention of its original setting, materials, and workmanship, the House of the Temple retains its integrity to the period of significance—1910 to 1929.

The high artistic achievement of the House of the Temple can be seen in assessments of the building during Pope’s lifetime and in the years since. The design received the gold medal from the Architectural League of New York—a board of Pope’s peers—in 1917, and in 1920, French architect Jacques Gréber wrote that “the ensemble is an admirable study of antique architecture, stamped with powerful dignity.” In the late 1920s, the House of the Temple was ranked as one of the three best public buildings in the United States, along with Bertram Goodhue’s Nebraska State Capitol in Lincoln and Paul Cret’s Pan-American Union building in Washington.9

The House of the Temple was among the first group of buildings to receive individual listing in the D.C. Inventory of Historic Sites. It also stands within the 16th Street Historic District. The District and the Temple were listed in the D.C. Inventory of Historic Sites on November 8, 1964, and in the National Register of Historic Places on August 25, 1978. In the most recent edition of the Guide to the Architecture of Washington DC, the description, in part, reads, “an awe inspiring temple in the midst of a quiet enclave.…” Most recently, in his book, John Russell Pope Architect of Empire, Steven Bedford calls it “one of America’s greatest architectural achievements.”10

Although John Russell Pope was not a Mason, the building design incorporates numerous Masonic signs and symbols. The Temple is a monument to the Scottish Rite of Freemasonry and references the Mausoleum at Halicarnassus. The granite stairs rising from 16th Street to the main entrance are arranged in groups of three, five, seven, and nine, which reflect the sacred numbers of Pythagoras and have symbolic meaning to the Masons. Two sphinxes flank the main entrance. To the right with its eyes half-open sits Wisdom, and to the left with its eyes open and alert is Power. These are the work of a well-known sculptor, Adolph A. Weinman. Surrounding the upper portions of the Temple’s facades are thirty-three columns, each thirty-three feet in height, representing the Thirty–third Degree of the Scottish Rite.

On the interior of the building, the iconography continues. There are numerous carved inscriptions. Two black Egyptian marble statues, representations of the hieroglyph that precedes the name of a god or a sacred place, flank the ceremonial stair to the Temple Room. The light that floods these stairs draws one upward to the Temple Room. In the Temple Room itself, the walls seem to expand rather than enclose the room. The large windows on each side of the room serve as a symbol of the progressive search for more light and include descriptive decoration. The glass in each graduates from a deep orange at the bottom to a pale, light yellow at the top. Crowning the center of the window is the double-headed eagle, the symbol of the Scottish Rite.

Finally, as the headquarters of the Scottish Rite of Freemasonry for the Southern Jurisdiction of the United States, the building not only includes office and utilitarian spaces, but archives, library, and museum space. The archives house some of the Scottish Rite’s most precious books and artifacts. The library is the oldest library in the District of Columbia open to the public and protects numerous special collections of books. The museum displays a variety of Masonic artifacts as well as tributes to distinguished donors to the Scottish Rite charities and the preservation of the House of the Temple.

Royal Cortissoz, in The Architecture of John Russell Pope, Vol. 2, wrote, “I cannot write temperately of the Temple of the Scottish Rite in Washington. I never see it without an uplifting of the heart; it is so vitalized an expression of imaginative power.” Those of us who are visiting and working on the building today could not express our feelings in a more eloquent and truthful manner.