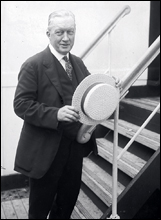 John Russell Pope, born in New York in 1874, was a distinguished architect of the early twentieth century. He is best known for designing the Jefferson Memorial, the National Gallery of Art West, and the National Archives building. Pope took to heart Richardson’s commitment to create “the most beautiful Masonic building in the world.” (Architect of Empire, p. 126).

Pope set out in earnest to create an elaborate masterpiece that would serve the Masonic ideal Richardson inspired. The exterior of the building stands 130 feet high, the top of which is surrounded by Ionic columns that rise to a magnificent stepped pyramid roof. The front of the building features two impressive sphinxes carved on site from limestone by famed sculptor Adolph A. Weinman, who is best-known for designing the Walking Liberty and Winged Mercury coins. The rear of the building is a dramatic rotunda, within which are the Library and the Grand Staircase that leads to the Temple Room.

The intense attention paid to the exterior of the building continued on the interior of the new Temple. Walking into the Atrium of the House of the Temple for the first time is an awe-inspiring experience. Like being transported back in time to an ancient temple, the Egyptian and Greek influences that fill the entire space are immediately recognizable.

For the floor of the Atrium, Pope used beautiful beige Tavernelle marble from France, inlaid with black marble from the Greek Isle of Tinos. Adolph A. Weinman sculpted the Egyptian statues made of black marble that flank the Grand Staircase in the Atrium. The statues were carved on-site out of marble from the shores of Lake Champlain. The ceiling and frieze on the top of the walls of the Atrium depict elaborate, colorful designs hand painted by Sherwin and Berman, Inc. of New York City, who were known for architectural woodwork and decorative painting.

The centerpiece of the Atrium is a large table made of Pavonazzo marble imported from Italy and inspired by a table found in the ruins of a Pompeiian home. The table features two double-headed eagles, the chief symbol of Scottish Rite Masonry, supporting the base of the table, with the words Salve Frater, meaning “Welcome Brother,” carved on the side.

The Grand Staircase rises dramatically from the Atrium to the rotunda entrance of the Temple Room. The Temple Room is a voluminous space with a domed roof rising over eight stories from the floor. The magnificent dome was the work of the Guastavino Fireproof Construction Company founded by architect, Rafael Guastavino Moreno.