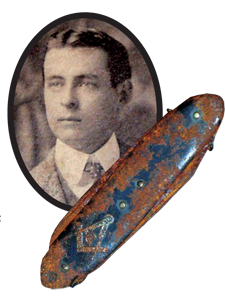 Photo: Bro. Oscar Scott Woody (1868–1912), Acacia Lodge, No. 16 of Clifton, Virginia was a Sea Post Office Clerk aboard the R.M.S. Titanic and perished on his 44th birthday when the Titanic sank. Bro. Woody’s Masonic pocket knife was found when his body was recovered. (Photos: Courtesy the Stephen J. Ponzillo, Jr. Memorial Library & Museum)

Among the more unusual items in the Stephen J. Ponzillo, Jr. Memorial Library & Museum at the Grand Lodge of Maryland are a number of items related to R.M.S. Titanic. While the connection between the Titanic and Masonry may not be apparent, like everything in the museum there is a story. The reason this collection of material is in the museum begins with a brother by the name of Oscar Scott Woody (1868–1912). Born on April 15, 1868, in Roxboro, North Carolina, he later moved to Virginia and became a member of Acacia Lodge No. 16 in Clifton, Virginia. He served for fifteen years as a Railroad Postal Service Clerk prior to being assigned as a Sea Post Office Clerk. He volunteered for the position on the Titanic after the clerk initially assigned to the post had been called home as his wife was ill. Brother Woody was one of five postal clerks serving aboard R.M.S. Titanic; two others were American, while the other two were British. Sadly all five perished when the Titanic sank on April 15, 1912. It was also Bro. Woody’s 44th birthday.

Bro. Woody’s body was later recovered. An entry in the diary of F. H. Lardner, Captain of the Mackay Bennett describes the scene the day they recovered his body: “Monday, April 22d. This day we picked up 27 bodies.… Everyone had on a lifebelt and (the) bodies floated very high in the water.…” The crew of the Mackay Bennett, one of the four ships chartered by the White Star Line to recover as many bodies as possible, would recover 306 bodies, of which 116 were buried at sea, including that of Bro. Woody. As part of the recovery each body received a separate number. Postal Clerk Woody was assigned number 167, which was stenciled upon a canvas bag into which his personal effects were placed after an inventory was recorded in a ledger.

Leelia B. Woody (ca. 1880–1963?), Oscar S. Woody’s widow, received bag 167 and retained it and its contents as her only memento of her husband. Despite having been married for less than three years, she never remarried and kept her husband’s photograph by her side until her death. At the time of her death these items were passed on to V. R. Gill (1901–1987), a member of Perseverance Lodge No. 208 in Indianhead, Maryland, to be presented to the museum in memory of Bro. Woody.

Among the items in the museum’s collection are his pocket knife, corroded by sea water and decorated with Masonic symbols, his membership card to his home lodge in Virginia (currently on loan to the Grand Lodge of Virginia), and a number of other documents found in his waistcoat pockets.

Coincidently, a Titanic survivor was a resident at the Maryland Masonic Homes at Bonnie Blink. Mrs. Ada Balls (1875–1967), born Ada E. Hall in 1875, married Martin Luther Balls (dates unknown) in 1896 and had two sons, Martin Luther Balls and Edgar William Balls. She was a second class passenger on the ill-fated ship. A widow with two grown sons; she had decided to emigrate with her brother-in-law, Rev. Robert James Bateman, to Jacksonville, Florida, as missionaries. She had no idea that she would be one of just 710 survivors. During the fateful night, Rev. Bateman gave up his seat in Lifeboat 10 to Mrs. Balls after seeing she was still aboard. Rev. Bateman perished with the ship and his body was subsequently recovered by the Mackay-Bennett, the same ship that recovered Bro. Woody’s body.

After the disaster Mrs. Balls married William R. Perine (1865–1955), a member of King David’s Lodge No. 68 of Baltimore, and went on to live a full life. From 1953 until her death, she resided at Bonnie Blink with her sister, Emily Bateman (the widow of Rev. Bateman). A religious woman, she regularly attended church services at the Chapel at Bonnie Blink. During her stay at Bonnie Blink it was noticed that every time the hymn, “Nearer, my God, to Thee,” was played she would cry. It was later learned that Mrs. Perine, as she was then known, remembered this hymn as the last song the orchestra played onboard the Titanic as she sank. As a result the hymn was barred from regular church services, a ban that has not been lifted to this day. She died October 1, 1967, at the age of 92 and is interred next to her second husband at Oaklawn Cemetery, Baltimore County, Maryland.

Woody’s heroic efforts to save the mail were noted in the 1912 U.S. Postmaster General’s Annual Report:

“About a quarter of an hour after the collision the opening or lower room in the sea post office was found to be practically filled with water and the sacks in it adrift. The clerks were seen in the sorting room above, closing sacks and preparing to take on deck all the mails available. The last reports concerning their actions show that they were engaged in this work and in carrying the sacks upon the deck to the last moment.”

“The Titanic was designated as a Royal Mail Ship (RMS), carrying mail under contract with the Royal Mail and the U.S. Post Office. The Sea Post Office used 26,800 cubic feet in her holds allocated for letters, parcels, bullion, coins, and other valuables. The Sea Post Office was on G Deck and was staffed by three Americans and two Britons, who worked thirteen hours a day, seven days a week sorting up to 60,000 items daily.” (en.wikipedia.org)
I have read and agree to the Terms of Use and Privacy Policy.
I Agree