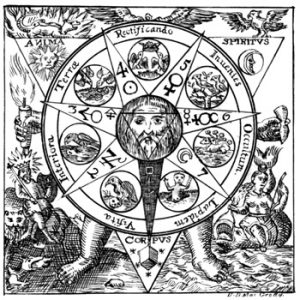 Photo: An alchemical image from Albert Pike’s Esoterika, The Symbolism of the Blue Degrees of Freemasonry

Given the recent attention cast on Freemasonry in general and the Scottish Rite in particular by the publication of Dan Brown’s new book, The Lost Symbol, since this past fall the House of the Temple has been inundated with a deluge of tourists who all seem to voice similar misconceptions about our Rite. Their ignorance can of course be forgiven. However, it should be the duty of all Masons when they come across someone who is sincerely curious about the fraternity, more especially a brother Mason, to educate them to the best of their ability. This article should prepare you for that important educational task.

The Scottish Rite originated in Scotland.

The Scottish Rite actually came to the United States by way of France. This is unequivocally the most common misconception we hear from visitors to the House of the Temple.

There is evidence of “Scotch Masons’ Lodges” dating back to 1733 in England; and there were also predecessors such as the “Adonhiramite Rite” (ca. 1781) which included many degrees that ultimately became part of the Scottish Rite.1 Yet, it was not until 1763 and the creation of the “Order of the Royal Secret” by Stephen Morin of France, that the ritual we practice today began to coalesce into a form recognizable to a modern Scottish Rite Mason.2

A 32° Scottish Rite Mason has more authority in a Blue Lodge than a 3° Master Mason.

There is an unsanctioned tradition in some Blue Lodges of telling new Master Masons that they must preside as master of their lodge before petitioning “high-degree” Masonry of any kind. This sentiment often leads to a belief that the appendant bodies are a natural and hierarchical progression beyond the first three degrees. While this is certainly true in the sense that the lessons of the Scottish Rite begin where the Master Mason Degree ends, the only requirement to join the Scottish or the York Rites is to be a Master Mason in good standing in a recognized jurisdiction—no presiding required.

At the formation of the Grand Lodge of England in 1717 there were only two degrees—the Fellowcraft Degree was the culmination of Craft Masonry. Eight years later comes the first evidence of the Master Mason Degree, and it was readily adopted by the grand lodge. Other degrees were welcomed as they arose, but not formally adopted by the grand lodge; there is no degree higher in a grand lodge than that of Master Mason.3 Since the very outset of high degree Masonry, the role it played in craft lodges has always been curtailed, as witnessed by a 1743 regulation of the Grand Lodge of France, limiting the privileges of “Scotch Master Masons.”4

The Royal Arch is older than the Scottish Rite.

No. Much credence is erroneously given to the notion that the Royal Arch is older than the Scottish Rite. This misconception comes largely from England where the Royal Arch is much more closely connected to the Craft and is seen by many as a part of and the culmination of Craft Masonry. This misconception migrated into the United States where it continues to this day. As stated earlier, the earliest record of a “Scot’s Master” dates to 1733. The first mention of “Royal Arch Masons” is in a 1744 Dublin pamphlet, A Serious and Impartial Enquiry into the Cause of the Present Decay in Free Masonry in the Kingdom of Ireland.5 The first record of the Royal Arch being conferred is in Fredericksburg Lodge, Virginia, in 1753.

The degrees of the York Rite and Scottish Rite differ greatly.

This misconception is only partially true. The structure and organization of the bodies are vastly different between the York and Scottish Rite, but the legends and themes of the degrees are remarkably similar.

From an organizational point of view, the York Rite tends to be composed of small, localized bodies, while the Scottish Rite has larger regional bodies. The Scottish Rite has two Supreme Councils that exercise complete control in their jurisdictions. There are fifty-one autonomous Grand Chapters of Royal Arch Mason, most of which belong to the General Grand Chapter Royal Arch Masons International, which functions as a loose confederation. The fifty-one Grand Councils of Cryptic Masons are organized similarly, while the Grand Encampment of Knights Templar has ultimate control over Templarism.

These organizational differences set aside, both rites expand upon the legends of the Blue Lodge Degrees. All Scottish Rite Masons are aware that the 13° and 14°, Royal Arch of Solomon and Perfect Elu, complement each other in telling of the discovery of the Lost Word. When compared to the Royal Arch Mason Degree, there are some striking similarities. Another example of striking similarities would be a comparison of the 15° and 16°, Knight of the East and Prince of Jerusalem, with the Commandery’s Order of the Red Cross. Lastly, it is worth mentioning that the 30°, Knight Kadosh, is a thinly veiled Templar legend which maintains many intentional parallels to the degrees of the York Rite Commandery.

Albert Pike extolled the virtues and benefits of the Scottish Rite above all other degrees.

Not true. Albert Pike accepted the Blue Lodge Degrees as the foundation of Masonic teachings. One of his most brilliant works is Esoterika: Symbolism of the Blue Degrees of Freemasonry, a detailed analysis of Blue Lodge symbolism. The fact that Pike held the symbols of Blue Lodge Masonry in high esteem is without question: “Every legitimate symbol of the Blue Lodge, everyone that really belongs to it, is a religious symbol, of great antiquity, which came to Free-Masonry from the Hermetic Philosophy by inheritance.…”6

The Scottish Rite North-South divide occurred as a result of the American Civil War.

Wrong. The roots of the North-South divide originated in the Grand Constitutions of the 33rd Degree of 1786, the source of traditional Scottish Rite authority, which stipulates that two Supreme Councils were to be created in the United States. However, the validity and accuracy of this document is still subject to much debate. The first legitimate Supreme Council in New York City was created in 1813 when the US Scottish Rite territory was divided into two jurisdictions, but the Northern Masonic Jurisdiction was not formally created until 1867 with the merger of two rival Supreme Councils.7