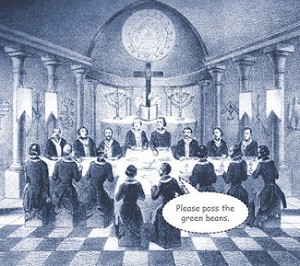 Enough already! We have been inundated with novels, documentaries, and Hollywood productions contributing to an image of Freemasonry fabricated by authors and conspiracy theorists who, for the most part, have never even seen the inside of a Masonic lodge room. Fingers have been pointed, rumors have been spuriously circulated, and whispers abound of secrets that are supposedly hidden away by select society of men. What’s driving me crazy is that none of it is has been accurate or totally truthful! Absolutely none of these revelations—fictional, historical, or contrived alike—even come close to revealing the truest domains of Freemasonry.

I am determined to set the record straight once and for all. Unlike the creative novelists, screenplay authors, and outright charlatans who have set the current stage for us, I lay before you my bona fides as a Master Mason and a Past Master in the jurisdiction of the Grand Lodge of California, F.&A.M. If for no other reason than to stop the insanity, I declare that I am knowledgeable and proficient enough and more than willing to finally reveal to you, the reader, what everyone apparently wants to know: What is the secret that Masonry so carefully guards and what is the Lost Word that it alludes to? Be forewarned. What I am about to reveal is neither as exciting as you might hope nor is it fodder for fictional embellishment. It’s just the plain, simple truth known to Masons everywhere.

Question: What is Freemasonry’s most closely guarded secret?

Answer: When you become a Mason, you gain weight!

It’s true! Ask any Mason. We love to eat and everything that we do has some kind of food involved: stated meeting dinners, banquets, and anything from snacks to full-blown repasts before and after degrees. It’s all simply a fact of life in Freemasonry. What makes matters even worse is that someone like my wife, a Registered Dietician, would flat out disapprove of most of our menus. Case in point: in the five years I have been a Mason, I have gained thirty pounds! (In the interests of full disclosure, I must admit that I’ve been married for the last three of those five years, and marriage may well have contributed to the gain.) Practically all of my brothers complain that hanging their suits and tuxedoes in closets somehow causes the fabric to shrink. The same phenomenon has been observed with the shrinking apron ties and belts of Past Master aprons!

In our defense, food has long been a prevalent part of our tradition. For a good part of Masonic history, lodges regularly met in taverns, inns, and restaurants. Meals were proffered in celebration of whatever purpose the lodge members could contrive to justify a meeting. And, yes, there was a fair share of imbibing, though brethren were always cautioned to maintain decorum and act as gentlemen. The Junior Warden and Stewards of the lodge were, among other things, expected to procure food and beverage for each gathering; sometimes at their own expense. Additionally, newly initiated brethren, as well as candidates for the subsequent degrees, were required to personally fund the celebrations that followed their ceremonies.

Things are a bit different today. Meetings are held in Masonic halls or temples, buildings and rooms fitted for the purpose. Brothers receiving degrees are not typically expected to provide the grub for celebrations, and the use of alcohol is not only moderate but strictly regulated by state and local legislation as well as the jurisdiction’s Masonic Code. Nevertheless, we are still huge consumers of food and have come to expect its presence at just about every one of our gatherings. Given that, I can reveal to you that all but the most disciplined brethren are prone to gain weight as a function of being Masons. We don’t even tell prospective candidates—our soon-to-be brothers—that it is going to happen, so it really is our most closely guarded secret.

Question: What is the Lost Word that Masons refer to?

“No” is truly our lost word. Why? Because when you become a Mason, you very quickly forget how to say it. There are basically two causes for this effect.

I clearly remember the very heartfelt advice given to me by one of my investigators when I first applied for the degrees of Masonry in my lodge. He warned me that the moment I became a Master Mason I would be besieged by brothers anxious for me to join other Masonic bodies and perhaps even would be solicited to join the line of officers in my lodge. His advice was for me to be judicious and to take my time to first learn about what it truly meant to be a Mason before taking on additional commitments. He was right and I followed his advice—well, sort of.

I was raised in the month of September. At the October stated meeting I was seated as Junior Steward. By the end of that year I was installed as Senior Steward and was on my way up the line. Likewise, within in a few weeks of being raised, I received the Royal Arch and Cryptic degrees because my candidate coach encouraged me to take them, and I wanted to do so based on what he had told me about their esoteric value. And by November, I had been flattered, cajoled, and persuaded to enter the Scottish Rite.

The phenomenon took hold almost immediately. It just suddenly got difficult to say “no”. Hey, at least I let a couple of years go by before joining the Shrine. In my defense, while I’ve since joined a couple of other Masonic organizations, I have promised myself that my goals for and what I wish to gain by being an active Mason do not include amassing a collection of dues cards.

The other reason that Masons forget how to say “no” is more obvious and has little, if anything, to do with having one’s ego stroked by brethren trying to win you over to their particular bodies, clubs, or projects. It has to do with the fact that Masons are, by their very nature, charitable and service oriented. That is, they rarely hesitate to provide assistance to others, be they Masons or not. Serving one’s lodge, other appendant or concordant Masonic bodies, church, and community and providing various forms of charity to those in need are just natural to a Mason. No matter how busy we may be in our families or careers, Masons rarely say “no” when asked to assist or serve. It’s exactly what makes us tick and is as natural to us as eating. And, perhaps unfortunately, those outside of our Fraternity are infrequently aware of the source of the service provided. There are a number of stories of Masons who have quietly gone about the business of providing charity, being so quiet and secretive about it that their own spouses and families were unaware of their activity.

There is a kind of corollary to this particular phenomenon that a number of brethren might dispute or take issue with. When it comes to charity, Masons will give until they poetically bleed. But suggest an increase in dues or the cost of a meal related to lodge activities and you’ll experience men who are so tight with their money that you would think they hadn’t made it out of the Great Depression much less this recent one. One might argue that it is the result of being thrifty or frugal; I suggest that it has more to do with a strong aversion to spending money on ourselves as opposed to giving it to alleviate the suffering of others. When it comes to the former, we can be the cheapest sons-of-a-gun in the world.

Well, there you have it as promised—the most closely guarded secret and the lost word are finally revealed and out in the open, and a giant weight has been lifted off of my conscience. Certainly as Masons we have other secrets but none of them, I assure you, are anywhere near as truthful and thought provoking as those two. And for as much humor as I hope to have provided in this little commentary, I can assure you that the reasons offered are sound and true. Masons and their families are an amazing group of people.