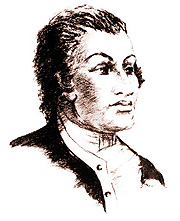 There is not a word about him in Mackey’s or Coil’s Masonic encyclopedias. No lodges are named after him. And yet he has been a Masonic and national hero since the earliest days of America’s revolutionary movement.

No one has ever doubted his heroic contributions to the Revolution. But the Masonic fraternity has, for 235 years, somehow missed honoring him as the brave financier of the Revolution while he was affiliated with Maryland Lodge No. 2, Ancient York Rite.

Who is this Mason who served his nation in its most fragile and endangered years? Brother Haym Salomon.

Born in Lissa, Poland, in 1740 and of Portuguese descent, he left his homeland after its partition in 1772. Salomon’s family was highly respected with many learned people. He enjoyed the friendship of Gen. Thaddeus Kosciuszko and Gen. Casimir Pulaski, two other Polish-born American patriots.

He settled in New York where he met and married Rachel Franks, daughter of Moses B. Franks of London whose brother Jacob Franks was a lieutenant colonel on General Washington’s staff. Rachel was the sister of Colonel Isaac Franks, judge of the Pennsylvania Supreme Court. Moses and Jacob Franks were sons of Adam Franks of Germany, a friend of King George of Hanover, who loaned that monarch the most valuable jewels in his coronation crown. Jacob Franks was the British king’s sole agent for the Northern Colonies at New York and his son David was the king’s agent for Pennsylvania. One would think that with such comfort and security in the new world Hyam Salomon would swear allegiance to the British crown.

Salomon bravely joined the American cause, a decision which led to his financial destruction. He was arrested and imprisoned as a spy soon after the occupation of New York by the British in 1776. Salomon was closely confined for a long period of time in the prison known as Provost which stood on the spot later occupied by the New York Hall of Records in City Hall Park. There Salomon and his fellow prisoners laid down every night to sleep, their bones aching on hard oak planks instead of a bed. They were so tightly wedged as a solid mass of bodies that they could turn right or left only on command.

Salomon knew English, Polish, German, Russian, Spanish, and Italian. Hessian General Leopold Philip von Heister heard of that and appointed him to the commissariat department of the British forces. There he rendered much service to American and French prisoners and helped many to escape. He created dissention among the Hessian officers, prompting several to resign from the service.

In 1778 Salomon was taken by British General Sir Henry Clinton on charges that he had received orders from General Washington to burn fleets and destroy warehouses, “which he had attempted to execute to their great damage and injury.” He was then put back in prison, tortured, and condemned to hang.

But on August 11 he bribed his jailer and escaped to Philadelphia, possibly with the help of his close friend General Alexander McDougall, commander of the American army of New York. Two weeks later he petitioned the Continental Congress to permit him to work for the cause. Congress did not accept Salomon’s offer, but it turned out that rejection worked to the benefit of the young republic and to Salomon as well. He established himself in business, becoming one of the greatest financiers of his adopted city. He was entrusted with the negotiation of all the war subsidies of France and Holland solely on his personal integrity. Several European financial houses trusted and did business through him. When Robert Morris became America’s superintendent of finance, he had 75 transactions with Salomon between August 1781 and April 1784.

In his 1911 book, Haym Salomon, The Financier of the Revolution, the Reverend Madison C. Peters wrote,

Salomon’s matchless enterprise, eminent respectability, remarkable intelligence, irreproachable integrity, his delicate sense of mercantile honor, his unbounded benevolence for all mankind, and, above all, his undying hatred of English tyranny, soon led to his recognition by the leading men of his time, and the uncompromising, implacable foe to British dominion was brought into intimate relationships with the Revolutionary patriots.

Rev. Peters also wrote, “Not only did Salomon advance large sums to the Government for which he received no return, but the services of James Madison, Edmund Randolph, Generals Mifflin, St. Clair and others were retained in the cause through his bounty.” In a 1791 letter Madison wrote, “The kindness of our friend in Front Street [Bro. Salomon] is a fund that will preserve me from extreme necessities, but I never resort to it without great mortification as he obstinately refuses all recompense. To necessitous delegates he gratuitously spares from his private stock.” Henry Wheaton said, “Judge Wilson, so distinguished for his labors in the Convention that framed the Federal Constitution, would have retired from public service had he not been sustained by the timely aid of Haym Salomon, as delicately as it was generously administered.”
The secret support of Charles III of Spain for the American cause was said to have been due to Salomon’s efforts. Indeed, Bro. Salomon was friends with all foreign powers in sympathy with the American Revolution at one time or another. James Madison, twice President of the United States, considered the most learned and patriotic member of the Revolutionary Congress, said of Salomon, “When any member was in need, all that was necessary was to call upon Salomon.”

Was this remarkable man ultimately rewarded for all gave and gave up? Sadly no. Bro. Haym Salomon died January 6, 1785, at the age of 45. He was bankrupt and left his wife and four children penniless. He was recognized posthumously with a US commemorative stamp hailing him as a “Financial Hero,” and by a statue of him and Robert Morris, the financiers of the revolution, with George Washington.

His obituary in Philadelphia’s Independent Gazetteer is a tribute to the esteem in which he was held by all.

Thursday, last, expired, after a lingering illness, Mr. Haym Solomon, an eminent broker of this city, was a native of Poland, and of the Hebrew nation. He was remarkable for his skill and integrity in his profession, and for his generous and humane deportment. His remains were yesterday deposited in the burial ground of the synagogue of this city.