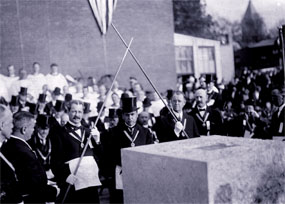 “The erection of a building so beautiful and so imposing as that which shall rise here is a matter which partakes of more than simply a fraternal importance. It is an event of civic moment. Indeed, we may ascribe to it a national character because of the fact that there are gathered here representatives from many of the states of our Union, and because this Temple will be an ornament to the Capital City of our Nation, and a splendid addition to its architectural beauty.”
—J. Claude Keiper, Grand Master of the Grand Lodge of the District of Columbia (Proceedings of the Grand Lodge of the District of Columbia, 1911, p. 63.)

A grand procession was formed that included a detachment of mounted police and the mounted unit of DeMolay Commandery No. 4, the fortieth Regiment Band from the Maryland National Guard, special guests, and the presiding officers in carriages. The parade proceeded from the Masonic Temple on Thirteenth Street to Sixteenth and S Streets, where SGC Richardson called the assembly to order and introduced Reverend William Tayloe Snyder, who deliver the invocation. After addresses by SGC Richardson and GM Keiper, various articles were placed in a copper box by the Grand Treasurer, James A. Sample, and deposited into a receptacle in the foundation.

GM Keiper, SGC Richardson, and other officers of the Supreme Council spread cement on the foundation with the historic trowel used by Bro. George Washington when he laid the cornerstone of the U.S. Capitol in 1793. The trowel was courtesy of Alexandria-Washington Lodge No. 22. The cornerstone was then lowered into the its place as music played in the background. Adding to the historic ambiance of the event, were the candlesticks for holding the lesser lights, which were used by Alexandria-Washington Lodge while General Washington was a member and Master.

Once the cornerstone was in place, Bro. Elliott Woods, Architect of the U.S. Capitol and representative of John Russell Pope, the Temple’s architect, presented the Grand Master with the square, level, and plumb so the appropriate officers could confirm that the cornerstone was “well-formed, true and trusty” (Proceedings of the Grand Lodge of the District of Columbia, 1911, p. 60).

In the Masonic ceremony, the presiding officers preformed the ritual of testing the stone. The Deputy Grand Master, using the jewel of his office—the square—reported as to the virtue of the stone. The Senior Grand Warden, using the jewel of his office—the level—tested the horizontal equality of the stone. Then the Junior Grand Warden, using the jewel of his office—the plumb—verified the perpendiculars of the stone. They then scattered corn, as an emblem of nourishment; poured wine, as an emblem of refreshment; and poured oil, as an emblem of joy. “The Grand Master stuck the stone three times with the gavel used by Brother George Washington in laying the corner-stone of the Capitol” (Proceedings of the Grand Lodge of the District of Columbia, 1911, p. 62). The gavel was courtesy of Potomac Lodge No. 5. At the conclusion of this historic event, the parade ranks formed again and proceeded back to the Masonic Temple.

Address to the Assembly at the Laying of the Cornerstone

“With the flush of success pulsing strongly within us, our highest wish today, the hope that should find deepest lodgment in our hearts, should be that our whole Fraternity may acquire a proper appreciation and a correct understanding of the noble purpose and exalted aim for which this and all our temples are erected; that it is
‘…not for beauty’s sake alone
The painted scene, the carven stone,
…But that our better self they lift
Above the mean and sensual drift
Of sordid things, and picture true
The gentler and the nobler view.’”
— J. Claude Keiper, GM of the Grand Lodge of the District of Columbia
(Proceedings of the Grand Lodge of the District of Columbia, 1911, p. 64)

Items placed in the copper box and placed into the receptacle
in the foundation during the laying of the cornerstone:

The Laying of the Cornerstone Ceremony, October 18, 1911. Archives of the Supreme Council, 33°.