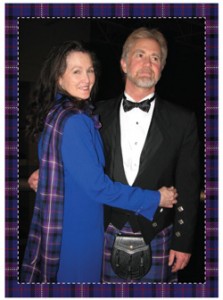 Many brethren of the Scottish Rite—especially those of us who regularly perform the 29th Degree, or have taken up the pipes, or are active in the Knights of St. Andrew—have bought a kilt.

In recent years, a new tartan has arisen in prominence which is of particular interest to Masons: the Freemasons Universal Tartan. Now worn worldwide, the Masonic tartan arose from humble beginnings, designed by a shy weaver in Park City, Utah—who also happens to be married to PGM Ridgely Gilmour, 33°, of Utah.

Anne Carroll Gilmour’s family immigrated from Scotland and Ireland to Nova Scotia, and then two generations later to the United States in 1958. Celtic pride is in her blood! But it was after moving to historic Williamsburg, Virginia, that 8-year-old Anne was first enchanted by the art of weaving. In 2000, she entered the Handweaver’s Guild of America Exhibition competition, earning a top national prize. She is now considered one of America’s finest tartan weavers.

But fame is not what soft-spoken Anne sought, preferring instead to weave quietly in her home studio.

“When it became clear that my husband was destined to move up in Grand Lodge, I sought an outlet to cope with the limelight,” says Anne. “A close friend of ours who’s also a Mason’s wife offered this advice: ‘Play to your strengths.’ As a weaver, I then conceived the idea of a Masonic tartan. I wanted to give something back to the organization which my husband loves so much and which does such good things for society.”

The design, or sett, of the new tartan took years to take shape from a vague concept to the first fabric. “I spent about three years mulling it over, trying to get the colors right,” says Anne. “Critical to defining a tartan’s design are its colors and thread count. Then it took another year and a half from a sketch to the first mill run.

“I presented three designs to the Grand Lodge of Utah. Members of the Grand Lodge and Masons from several lodges reviewed the options. The overwhelming decision was this tartan.” This was well before her husband’s installation as Grand Master.

It’s easy to see why the brethren were all of one mind. The final design is stunning in its beauty. One is first struck by the elegant employment of purple and blue—colors that have obvious Masonic significance.

“The seven colors represent many things to worldwide Masonry,” says Anne. “In concert with Masonic symbolism, no one color means only one thing. For example, the blue, of course, is the dome of heaven, a reference to blue lodges. But it is also closely tied to several other Masonic groups. The red cross in the blue field is an ancient symbol of relief [giving rise to the modern symbol of the Red Cross]. It also alludes to the Red Cross of Constantine.

“The white cross on the purple field, meanwhile, is a reference to the Southern Cross—a tip of the hat to brethren in the Southern Hemisphere. The two crosses thus form a pivot-to-pivot pattern. Purple is an ancient color of royalty, but it is common to Job’s Daughters, the Scottish Rite, and Cryptic Masonry. You’ll also notice that all five colors of the Eastern Star points are represented. And on it goes. Green for Daughters of the Nile, purple and gold for Prince Hall, and red and gold for the Shrine. And of course black, red, and gold for DeMolay.”

As in Craft Masonry, the symbolism in the tartan is quite extensive, and Anne wanted to get the design just right.

“The green line was originally twice as wide,” she laughs, “but after looking at it again, I narrowed it.”

The tartan was officially approved by the Grand Lodge of Utah—yet it was still an unknown Masonic emblem. Its real unveiling occurred rather by surprise in July, 2004, at the Rocky Mountain Masonic Conference.

“While the men were all in conference, the women were asking each other, ‘How can we support Masonry with some kind of fundraiser?’” says Anne. She presented her tartan as an option. “It was received extremely well. The ladies bought the hand-woven samples right out of my hands!”

With excitement building, the Gilmours applied to register the design with the Scottish Tartans Authority in Perthshire, Scotland. Brian Wilton, Director of the Tartans Authority, says about 120 tartans per year are registered, “and it seems to be on the increase.” The Tartans Authority electronically compared Anne’s pattern to determine its uniqueness based upon color sequence, and a Certificate of Recording was issued on August 14, 2004. It is registered as ITI 6245 (International Tartan Index). It is one of several registered Masonic tartans, but to this day, it is the only one not designed for a specific lodge or Grand Lodge, but for all Freemasons worldwide. (Check out www.tartansauthority.com/tartan-ferret and ITI 559, 560, 561, 920, 1799, 2628, 5370, 5776, 5819, 6353, 6640, and 6641. )

The Gilmours contacted several mills in Scotland in search of a production weaver. “The most forthcoming and responsive was Strathmore [Woollen Mills in Fofar, Scotland, www.StrathmoreWoollen.co.uk],” says Anne. “With $2,000 of seed money for the first run of 13-ounce fabric, the minimum mill run of 50 meters rolled off the loom.”

Meanwhile, Deputy Grand Master Gilmour had the Grand Lodge apply for a trademark on the fabric to help protect the design. That trademark certificate was granted on January 10, 2005, shortly before his installation as Grand Master.

From that point forward, its visibility accelerated. Interest in the Masonic tartan grew as the word spread about a beautiful new pattern that was designed for members of all Masonic organizations. “Anne signed over the rights to the design to the Grand Lodge of Utah as a donation to and fundraiser for the Grand Lodge,” says Most Worshipful Brother Gilmour.

“The Freemasons Universal has been a particularly successful tartan due to the combination of a popular and pleasing design together with active promotion by the Grand Lodge of Utah,” says Jonathan Brown at Strathmore Mills.

Today, Most Worshipful Brother Gilmour stays busy in his lodge, Scottish Rite Degrees, and with several other state and national Masonic activities. He often sees the tartan worn at meetings and Masonic social functions around the country.

“I certainly have to admit to feeling a sense of pride and appreciation for Anne’s work. She was very supportive of my time in Grand Lodge, and the Freemasons Universal Tartan helped to build friendships around North America as well as in the UK. We’re so grateful for the support we’ve received from all the Masonic bodies for this project.”

Having designed the Freemasons Universal Tartan as her gift to the Craft, the tartan has become what Anne Carroll Gilmour is known for among the brethren. Ironically, what started out as a method of coping with the Masonic visibility of her illustrious husband has now propelled Anne into her own Masonic spotlight.

“I designed this tartan for the benefit of the family of Freemasons and all of its charitable activities,” says Anne. “Just as other tartans are designed to exhibit the unity of proud Scottish clans, the intent of the Freemasons Universal Tartan is to unify the brethren under a family emblem for Masons anywhere in the world.”