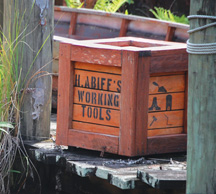 WBro John Sharpe, PM of Keystone Lodge No. 153, Linwood, N.J., recently visited Disney World’s Magic Kingdom Park in Orlando, Florida. While relaxing on the Liberty Square Riverboat ride with his wife, he noticed a prop box sitting on a dock near the Big Thunder Mountain Railroad giving “atmosphere” to the scene. Bro. John says, “I did a double-take when I realized what was written on the crate, quickly asked my wife for our camera, and was able to snap this picture.”

Walter Elias Disney (1905–1966) was a member of the Order of DeMolay as was his good friend Mickey Mouse, but there is no evidence that Disney ever became a Mason. In the 1950s Disneyland had many clubs for its employees—bowling, knitting, skiing, etc., and the “Disneyland Masonic Club.” “Club 33,” an exclusive private dining club, can be found at the Disneyland Parks in Anaheim, California, and Tokyo, Japan. The club is apparently named for its location in the original park: “33 Royal Street” in New Orleans Square. The name has spawned a host of conspiracy theories about the connection between Disneyland and 33° Masons.

Wor. Sharpe has three sons, is a high school culinary instructor, and is an eleven-year Mason. The Scottish Rite Journal looks forward to reporting his further discoveries!