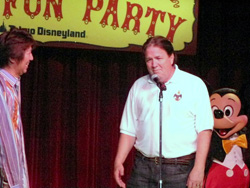 This fall the Grand Lodge of Japan Children’s Festival Committee sponsored a day trip to Tokyo Disneyland. All members of the committee were also members of the Valley of Tokyo, and among them were several of the Tokyo Chapter, Knights of St. Andrew. The guests of the Masons were seventeen seriously or terminally ill children and their immediate families.

For the last twenty years the Grand Lodge of Japan has put on a festival in May for orphans and challenged children. In 2010, a second event was added—the trip to Tokyo Disneyland.

For this trip, Disneyland’s made available their Diamond Horseshoe “Saloon” for the children and their families. GM Donald K. Smith, 32°, welcomed everyone while the MC, Bro. Atsushi Kubo, 32°, KSA Chieftain, did a fine job explaining to the Japanese-speaking guests what Masonry is all about. Later that evening both Bros. Smith and Kubo were invested with the rank and decoration of a Knight Commander of the Court of Honour at the Tokyo Bodies Stated Meeting.

Following the welcoming speeches, there was an onstage drawing for prizes, and if the child couldn’t walk, a smiling family member picked it up. To see the parents smiling and laughing was wonderful as well. They often suffer in silence along with their children.

Then the big moment came when Mickey and Minnie came out on stage followed by the rest of the Disney cartoon characters. This ignited the house with smiles and squeals. What happened next was truly inspiring. All of the Disney characters came offstage for an extended photo session that lasted 30 minutes. Every child was able to have an individual picture taken with each of the characters!

After the photo shoot, the children and their families enjoyed a day of sunshine and good memories in the amusement park. The worn-out committee (most of whom had to get up very early to be at the park by opening time) was able to chalk up another well done project for Masonic charity in Japan.