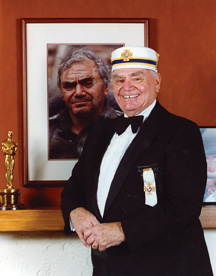 Illustrious Ernest Borgnine, 33°, Grand Cross, received the Screen Actors Guild Lifetime Achievement Award for his sixty-year career. He was first cast as a hospital attendant in a Broadway production of Harvey and went on to appear in more than 200 films. He usually played a villain until his breakout starring role in 1955’s Marty, for which he won an Academy Award for Best Actor. He made the transition to television comedy when he starred in McHale’s Navy. He most recently appeared in the film Red and is said to have several film appearances due out in 2011.