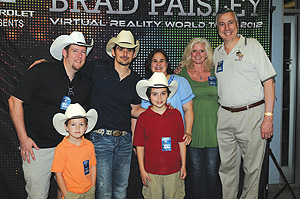 Bro. Brad Paisley, 32°, is undeniably a world-class guitarist and country music star. At St. Louis’s Verizon Amphitheater during Brad’s opening night of his “Virtual Reality 2012” tour, he also became a life-long hero to two young men whose lives have been changed through the mission of the Scottish Rite.

Robert and Alex Kamp, two St. Louis boys and accomplished young musicians themselves, enjoyed Brad’s musical gifts on the stage that night as well as experienced his caring nature first-hand through a meeting after the concert. Brad Paisley, having two young sons himself, understands the impact that communication has on a child’s life, be it through music or words.

For Robert (3rd grade) and younger brother Alex (Kindergarten), the challenge of communication skills was identified early through the watchful eyes of their parents who took action to seek necessary care. At two years Robert came to the Walker Scottish Rite Clinic for Childhood Language Disorders in St. Louis, a RiteCare® Clinic. Robert’s mother, Christine, said, “By age two I noticed Robert was not using many words and was very frustrated. After many, many months of therapy sessions twice a week, Robert graduated from the Clinic’s program with age-appropriate skills.”

Alex was a shy little guy who didn’t like to talk. Having learned the signs to watch for, his mother knew what to do. At age two and a half Alex was placed in the Walker Scottish Rite Clinic’s group therapy program and then moved into individual therapy. Christine said about her boys’ progress, “The Clinic has changed the lives of our boys greatly. Communication is a necessity to a successful life. With the help of the Walker Scottish Rite Clinic our boys are well on their way—one sound, one word, one sentence at a time.”

Scottish Rite Masons, like Brad Paisley and the thousands of gentlemen nationwide that live the mission “helping children communicate” through the RiteCare® programs, affect the lives of children like Robert and Alex daily. Through this musical night in St. Louis, Bro. Brad reached out and inspired two special young men who lives have been directly impacted by the Scottish Rite and their mission to help children communicate.