I didn’t realize it until Dr. Brent Morris, 33°, Grand Cross, Editor of the Journal told me, but this issue marks my 15th Anniversary as Book Review Editor. “Thank you!” to all the Brethren for your patience! It is a great deal of fun, and beside that, they give you free books! What more could one ask?
A mixed offering this month. We are running the gamut (or perhaps gauntlet) from old to new. There’s a lot here in a few pages.

Talk about old and new! This is the first publication of the rituals Pike transcribed in the mid-1800s. And it is beautiful! My copy arrived about six days before this column was due, and it has played havoc with my sleeping. The binding is inspired by the binding of Pike’s original. And Ill. Brother de Hoyos has done his usual outstanding job in editing and preparing the text. These are the texts Pike worked from in preparing the rituals of the Scottish Rite. It is wonderful to see how ideas have changed and developed over time. It gives you a sense of the depth of the Rite and of the human experience which it reflects. And the additional notes and material by Brother de Hoyos adds excellent information and context. This is a fine production in every sense of the word, and really needs to be in your Masonic library—but more than that, it needs to be by a comfortable chair. Outstanding read! 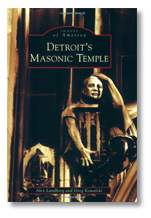 Compared to the vast history covered by Masonry, I suppose no American Masonic building can really be called old, but it certainly comes close. It is a wonderful building, and Brothers Lundberg and Kowalski do a good job of capturing it. It was built in the days of glory—a time when Masons spared no expense when they did something. I remember a newspaper article published in Oklahoma City in the 1940’s which simply remarked in passing: “When the Masons do anything, no one can do it better.” In many ways, we have sadly declined from those days, but it is important to remember them; and I hope that in the future, we will reclaim that heritage, and decide that quality is worth any price.

When it opened, the Detroit Temple was a national news story. It was structurally innovative for the time, and it was built with skill, love, and integrity.

Let me quote from the back cover of the book.

The largest Masonic Temple in the world. Detroit’s Masonic Temple is a monumental structure with a rich and colorful history, befitting one of the most historic organizations in the world. Encompassing more than 1,000 rooms and more than a million square feet, the Temple has served Masons since 1926 and provides a venue for many leading entertainers and theatre productions. Its lodges, chapels, and ballrooms are masterpieces of architecture rich with the symbolism of Freemasonry, evident even in the smallest details. The Temple stands as an artistic work of architecture and as the physical embodiment of the history, traditions and symbolism of Freemasonry.

There are hundreds of photographs illustrating the building. I only wish the book were larger and longer. It is a good book to have in your Lodge library, and an even better book to look through from time to time, to remind yourself of what once was, and what could be again. 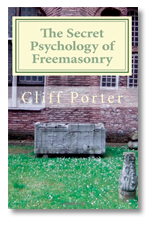 For something new, especially for a new approach to an old question, one could hardly do better than this, In the interest of “full disclosure,” I should tell you that I had a chance to read the book in draft and was honored with an invitation to write a foreword.

Brother Porter is a rapidly rising star in the Masonic firmament. He did a series of extremely popular break-out sessions at the 2011 Conference of Grand Masters of North America and received numerous invitations to address both Lodges and Grand Lodges across the United States, and has just returned from being keynote speaker at a new Lodge in Lebanon.

If I were to attempt to summarize the book (not a small task) I would say that Brother Porter is working at answering a basic question. We say that Freemasonry takes good men and makes them better men. The question is: how? What is the process? What insight comes that makes the change? And when initiation “works,” when it truly has the intended unconscious effect, what happens? To quote from the introduction:

We may scoff at such an idea, given our current approach to Masonry in America, However, it is also part of this premise that the deeper meanings of our ritual have been lost to us in a myriad of minutes, mediocre food, and unrelated charity work. Charity work for its own sake has little to do with the true charity of the heart, as practiced by those who have come to a realistic view of themselves and others. When the true connections of human beings, one to another, become apparent, charity becomes as beautiful and as selfish as it is intended to be. This may seem a strange statement, but Masonry, much like charity, is a selfish journey shared with others.

Some of the ideas in the book may seem daunting at the beginning, but Brother Porter takes us step by step through the process by which we can understand the unconscious life within us, and the way the ritual of Masonry resonates with that life. I really like this book!

First of all, let me strongly encourage you to join the Scottish Rite Research Society if you are not already a member. Joining information is at the end of this column. It has to be one of the world’s great deals. If you had been a member in 2010, you would have received this issue of Heredom ($39) and the Pike book mentioned above ($65) and a year’s membership only costs $52. Seems like a no-brainer to me.

Ill. Brother Robert Davis has produced another winner with this volume. As always, Heredom is a carefully selected collection of the latest and best Masonic research papers being written. The articles in this volume include “The Degree of Noachite or Prussian Knight,” “Joseph Cerneaux. His Masonic Bodies, and His Grand Consistory’s Minute Book,” “Royal Arch of Solomon and the Influence of Wonder in the Rite,” “Jacobite vs. Hanoverian Claims for Masonic ‘Antiquity’ and ‘Authority’,” “Theological Conundrums from the ‘Burned Over District’ as the Key to Mormonism for Freemasonry,” “The Masonic Roots of the Hermetic Order of the Golden Dawn,” and “The Symbolic Camp of the 32°: Mysteries of Sacred Geometry and Masonic Astronomy.” I enjoyed all of them, especially the material on the Noachite or Prussian Knight Degree, because I played the part of the Lt. Commander for more than a decade. But the one which really resonated with me was “Royal Arch of Solomon and the Influence of Wonder in the Rite,” by Brother Mark C. Phillips. I’m going to be thinking about that one for a long time.

Talk about a range! There is something here for many different interests—and you may even discover some interests you didn’t know you had.

If you’d like to become a member of the Scottish Rite Research Society, visit our web site at www.scottishrite.org/about/masonic-education/srrs.

I missed this book when it was published, and found it while doing some Internet browsing. First, it is worth owning for the illustrations alone, they are well chosen and many are really beautiful. The text is interesting as well. It belongs, essentially, in the “origins” tradition, speculating of how Freemasonry developed and, especially, where its philosophy and ideas developed. But it is more than that would suggest. There is a brief but interesting discussion of the co-development of philosophy and the mystery traditions, and then some intriguing ideas on the relationship of Freemasonry with older means of transmitting knowledge. The author suggests that once an idea becomes officially classified as heretical, it becomes necessary to pass those ideas covertly. You may not agree with all the author’s conclusions, albeit he makes some convincing arguments, but I think you will enjoy the exploration.

So, there it is, old and new, just like Masonry itself. Nothing merely old could have survived as long as we have. Nothing simply new could command the attention and devotion the Craft enjoys. It’s the mixture which keeps us vital.