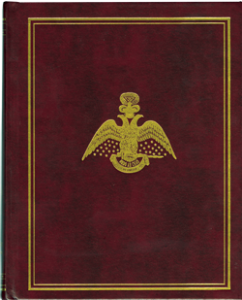 It’s that time of year again when we suggest some ideas for the Holidays (either getting or giving). I’m really excited about some of the books here—and at least one is the realization of a decades-long dream.

First of all, I always recommend a membership in the Scottish Rite Research Society. If you are already a member, consider giving a membership to some young, inquiring Mason. You get the most current and some of the best Masonic research in the world, and you get a great bonus book each year. The bonus book for those who join in 2011 will be a translation of Les Plus Secrets Mystères des Hauts Grades de la Maçonnerie Dévoiles (The Most Secret Mysteries of High Degrees of Masonry Unveiled) a 1766 French exposé of high degrees, part of which found its way into the Scottish Rite. Heredom, the printed transactions of the Society, is a fine hardbound book with an exciting range of topics. Add the bonus book, and The Plumbline, a quarterly newsletter, and it’s simply the best deal going. As if all this were not enough, you get a 10% discount of other books from the SRRS.

Albert Pike’s Morals and Dogma, Annotated Edition, edited and annotated by Arturo de Hoyos, 2011. The Supreme Council, hardbound, illustrated, annotated, new index, 1,116 pages, available in two bindings, traditional cloth binding for $75.00 or leather binding with bound-in cloth markers, gilded edges, and decorative stamping for $135.00. Don’t forget the discount if you join or already are a member of the SRRS. To order, go to the Supreme Council store at www.scottishritestore.org and click on the edition you want to buy.

I really doubted I would live to see this. For decades, I’ve haunted library sales and used book stores, buying copies of Morals and Dogma and giving them to new Scottish Rite Masons. And here it is! In a beautiful edition, with great annotations and other material to make the reading easier and even more rewarding. I indulged myself with the leather bound edition. (I figured if I had waited for something for a quarter of a century, I might as well do it right.) Brother de Hoyos has done a first rate job! In spite of what you may hear, it isn’t a hard book to read IF you take it on its own terms. Don’t try to breeze through it or to read it like a novel. You will only get frustrated. Read it as you would drink a glass of fine wine—slowly, savoring it. And here is a real hint—although people seldom believe me: Read it out loud to yourself. Pike was a great orator, one of the greatest of his age. His style is an oral style. Read it out loud and you will automatically find yourself falling into the natural rhythms in which he wrote. 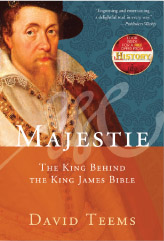 For this and the two following books, I am indebted to the Companions at the Knight Templar Magazine. King James has always fascinated me. Setting aside the controversial question of his relationship to, or even awareness of, Freemasonry, there is the fact that the King James translation of the Bible has had an incalculable impact on our history and culture and is a major source document for Masonic ritual. But who was he? “Intellectually astute, he can dazzle with the polish of his rhetoric one minute, and speak with the vulgarity of a tavern bawd the next. Speaking Latin and Greek before he was five, King James is an amusing mix of bombast and imperium, of sparkle and grime, of smut and brilliance, of visionary leadership and blunder.”

Teems has given us a picture of the king which reads easily and quickly, with much the comfortable feeling of an over-the-fence gossip. That’s the first part of the book. The second part is a discussion of the translation itself—with all the sincere piety and political undercurrents which swirled around it. It’s hard to put this book down.

This enjoyable book developed out of Bro. Harrison’s studies for his Ph.D. at the University of Liverpool. It is a remarkably clearly-written and well-researched history of the development of the Fraternity and the ritual, which provides insight into many of the essentially English events which had such an important effect on American Freemasonry. There is much to glean from these pages. Harrison did much original research concerning Masonic gravestones, and the results are given here. More than that, he shows the relationship between much of the intellectual life in England at the time and the ritual and symbolism of the Freemasons. This is a great holiday gift for a Masonic friend or for the library at your Lodge. 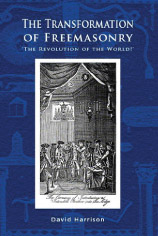 This second book continues Brother Harrison’s explorations of the history of Freemasonry. We often do not realize just how turbulent the history of Freemasonry was in the late 1700s and early 1800s. We take some pride in the fraternity’s involvement in the American Revolution, the French Revolution, and the spread of democracy in South America. For many, however, this was not an evidence of enlightenment so much as a proof that Freemasons were dangerous and needed to be suppressed or at least watched. Yet, by the mid-1800s, in England, Freemasonry had become comfortably respectable. In this book, Dr. Harrison traces the path by which that happened, and much more. This is a fine companion book to the first one listed and an enjoyable read in its own right.

I must admit that when this book first arrived in the mail, I looked a bit askance. I soon changed my mind. This little book isn’t written for Masons, it is written for Mason’s wives—especially perhaps those wives whose friends or church members are suspicious of or ignorant about Freemasonry. And it hits its target. I have loaned it to the wives of some Brothers, and they greatly enjoyed it.

A couple of caveats: there are some errors in the book—mostly they are innocent errors which come from assuming that the structure of Freemasonry is the same everywhere, with the same Lodge officers, and the same traditions. That isn’t true, of course, and so you may find some areas in which what Mrs. Carver writes doesn’t quite fit the practices in your Grand Jurisdiction. Some things will seem a little oversimplified, to those of us who delight in debating the minutia. (But that is what makes it a valuable book for its purpose.) A little more distressing for those of us who like sometimes to pretend that the Internet doesn’t exist and that the full ritual isn’t available to anyone who knows how to spell “Masonic ritual” is that she discusses the penalties—but then goes on to show why no one should worry about them.

As I said, the Masons’ wives who have read it liked it a lot. I think it would be a good idea to have a couple of copies available at the Lodge. And I enjoyed reading it as well.

Much thanks to M.W. Richard Fletcher for telling me about this book. It is one of the best biographies of Socrates I have read, by an author who is among the bright shining new lights in historical biography. It just is not impossible to overstate the importance of Socrates in the development of modern thought. As a blurb on the book cover has it, “We are the way we are because he was the way he was.” The Socratic ideals of truth, knowing what is good, and self-examination are powerful currents in our fraternity. Ms. Hughes gives us a wonderful portrait of this wonderful, annoying man and his thought. Equally importantly, she gives us a remarkable portrait of Athens during his time, and especially the importance of the rituals and mysteries. They come alive before us in her words. I strongly recommend this book, not only because it is a joy to read but because it provides excellent background information for understanding the traditions which, many would suggest, found a synthesis and fulfillment in Freemasonry.

Herd, Robert, editor/owner, Living Stones: A Magazine for Freemasons electronic magazine, published monthly online. One can purchase a year’s subscription for $50.00 or an individual issue for $5.50. More information at www.livingstonesmagazine.com

I greatly enjoy this new magazine. While I am not fond of the word edgy (my discomfort being more with the word than the concept), it’s a pretty good description of some of the contents. The color and layout of the magazine are well done (the editor avoids the all-too-common error of becoming so “artistic” that it’s difficult to read). The authors include some of my favorite young writers, including Cliff Porter, Timothy Hogan, and John Nagy—all of whom have had books reviewed in this column. Brother Herd hopes in time to be able to publish in hard copy as well as electronically, and I sincerely hope that comes to pass.

But even though I have suggested the edginess of the contents, the editorial goal is inclusiveness not exclusiveness. His hope is that every Mason can find something he likes in the magazine, and I think he manages his goal well. I bought a subscription myself, and I’d encourage you to do likewise.

And a final Holiday Hint. Don’t forget that there are many good gifts at the store at the Supreme Council website—ties and accessories and books and lots of other good things, www.scottishritestore.org. Happy shopping.