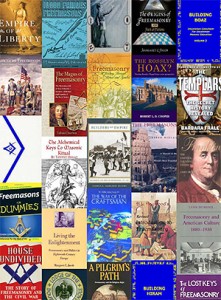 We’re under a tornado watch as I am writing this. The wind and rain are lashing around my study on the second floor of the house, and I could have sworn the lightning just illuminated an old woman on a bicycle flying past. The air is a mixture of rain, leaves, hail, and the odd scrap of paper. In some ways, Masonic education can be like that; a mixture of the good, the solid, the imaginative (sometimes as opposed to researched), and the attack. And then, if you are lucky, comes that moment amidst the chaos when enlightening strikes and something becomes clear. Knowing what’s good isn’t always easy. To help, in this column you will find some recommendations by those uniquely qualified to offer them.

We asked some of the most respected and best qualified Masonic Librarians to recommend up to five books as their top picks for general Masonic information, and another five books for deeper study. Their responses are given below, with thanks. With the exception of Further Light and One Hundred Questions About Freemasonry, which are available from MSANA, the books can be found for purchase on the Internet.

I had the advantage of reading the suggestions of the experts who follow before I had to write my own. As a result, to give you a wider variety of choices, I’ve tried not to recommend books suggested by others. The fact I have not included a book myself does not mean I would not recommend it. (S. Brent Morris, Arturo de Hoyos, Mark Tabbert, and Kirk MacNulty, for example, are always near the top of my reading lists).

For Deeper Study
First of all, for deeper study in a vast number of fields relating to Freemasonry, I’d strongly recommend Heredom, the annual proceedings of the Scottish Rite Research Society. You receive the books automatically when you join the Research Society (www.scottishrite.org/what/educ/srrs.html), and there is no finer collection of research and information on Masonic topics to be found.

Director of the Chancellor Robert R. Livingston Masonic Library of the Grand Lodge of New York

Director of Collections, Library of the George Washington Masonic Memorial

Librarian of the Library of the Grand Lodge of Iowa