This article first appeared in the July/August 2022 Scottish Rite Journal, as part of the Cornerstones of the Craft series.

I am a bibliophile, for my attention always has been attracted easily by great and rare tomes. It is with pleasure, then, that I review a book that is not very old but now out of print and thus inaccessible to many readers: Vested in Glory by Ill. Jim Tresner, 33°, Grand Cross. It does much more than present the “Aprons, Cordons, Collars, Caps, and Jewels of the Degrees of the Ancient and Accepted Scottish Rite of Freemasonry” (the book’s subtitle), and I hope here in my review to give the reader an idea of this illuminating book and its author. 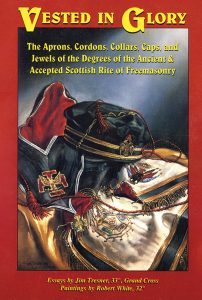 Dr. Tresner was, along with Dr. S. Brent Morris, 33°, Grand Cross, a man whose face I had come unconsciously to associate with the Scottish Rite, even before I joined, owing partly to their appearances on television and in documentaries on Freemasonry. Sadly, Ill. Tresner died the year I joined the Scottish Rite (2018), and our Order certainly felt the gravity of such a loss. His work, however, lives after him.

As with most good writers of any age, Ill. Tresner, was able to recapture something of the numinous, the intangible, and the wonderful contained in the subjects about which he was writing. Dr. Tresner wrote on his own speculations and unique discoveries, but he also was gifted at reevaluating and reorganizing treatments of truths he had perceived in the body of Scottish Rite work, and some things were entirely the ideas of others. Yet they were all of them woven into a text that crystallized his subject into an immediately useful, philosophically keen, and stimulating collection. 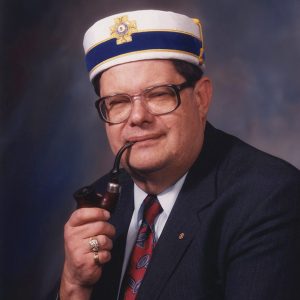 Ill. Tresner’s style makes his work all the more rewarding to read. For example, he writes in the Introduction that studying symbols

expands the brain. Learning any new symbol system does that … you can think with the visual symbols of the Scottish Rite in ways you can’t think in words, numbers, or musical notation.

Dr. Tresner tells us that the contemplation of our symbols is the cultivation of clearer, healthier thinking. I have yet to discover a more striking or disarmingly simple definition of the mission of the Rite than this. In fact, so much of what follows in Ill. Tresner’s book is influenced by this idea. For example, he describes a brother’s progression through the Lodge of Perfection in the perennial terms of the hero’s journey, the quest motif we are all familiar with as a common, almost memetic structure in literature and cinema. In this, he follows (and the candidate pursues) a path set out by Joseph Campbell in his Hero with a Thousand Faces (1949), in which Campbell sees a common archetype in the ancient Sumerian King Gilgamesh “set[ting] forth to attain the watercress of immortality,” the Greek hero Jason “sail[ing] through the Clashing Rocks into a sea of marvels,” and King Arthur and his Knights of the Round Table undertaking the quest for the Holy Grail. (Quotes from Campbell.)

After referencing the Campbell study and the mythic quest idea, Ill. Tresner paints for us a captivating, and dare I say fun, picture of the hero-like quest or journey through the Scottish Rite degrees. On the “Rose Croix” Degree, for example, he writes:

If the purpose of the Lodge of Perfection is self-discovery and, especially, the awakening of the individual’s spirituality, the purpose of the journey of the Chapter of Rose Croix is to fan that spark into a flame and to make it the center of our lives and interactions with others.

Like the heroic quests of old, this takes fortitude and courage, for Dr. Tresner goes on to remark that the death of ego is imperative to the success of the mythic journey, or the quest of the ages, and this overcoming of ego is far from easy.

As for the goal of the journey, if an initiate truly acts out the philosophy of Freemasonry, he becomes the living embodiment of the symbols he studies, or, rather, he becomes that which they represent. Given the vivid backdrop of the symbols of the degrees themselves, on which Ill. Tresner writes marvelously, the reader is presented with a cohesive, approachable, and enlightening lifetime journey.

To write of all this in an accessible way—to construct a piece that helps the reader understand, if not accomplish, the goal of the subject about which one is writing—is a great skill and triumph, both literarily and intellectually. Not only are we being given an education without peer on the accoutrements of the Scottish Rite degrees, but we also are being assisted down a road of self-discovery. This is one of the aims of the whole symbolic system of the Rite itself: to be a guide.

As Dr. Tresner discusses the archetype of the guide on the hero’s journey as a feature of the Lodge of Perfection, I would argue that he himself performs this function in this book. The author does not address such ideas in purely academic terms but speaks warmly and directly to his readers. You, the initiate, are the hero on the journey of self-discovery and recognition of inner glory, and our Ill. Br. Tresner is writing to you and about you.

In closing, let us remember that man made the work of the Scottish Rite for man, and Masonry, at its essence, is all about the nature and possibilities of man. To close on this theme, I again will quote Ill. Tresner, who writes in the last few pages of his fine work:

He [man] has sharpened his skills, learned when to attack and when to defend. He has been taught that the thoughts of great men outlive them, and that the Great Pathfinders—the sages, philosophers, and thinkers of the past—stand ready to assist him at any point. All he need do is read the written record of their thoughts.

Photo: Detail of the front cover of Vested in Glory, showing the regalia of the Scottish Rite's 32°, Master of the Royal Secret 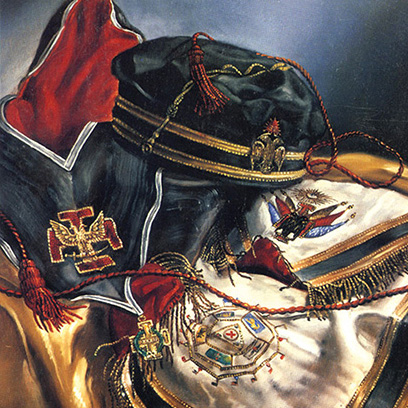