Home » Scottish Rite Myths and Facts » When did the Scottish Rite start conferring degrees with costumes and in theatrical settings? 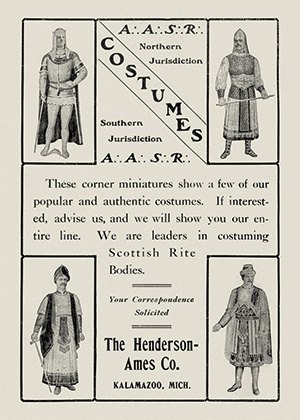 From the September/October 2013 Scottish Rite Journal: Graphic: This advertisement for Scottish Rite costumes appeared in the The New Age magazine for December 1904. At least by 1864, the Cincinnati Scottish Rite had installed a raised stage and boasted of “rooms, painting, scenery, wardrobe, properties, &c., &c., necessary for conferring the … degrees.” This change in performance venues came at the beginning of and continued through the “Golden Age of Fraternalism” (1870–1910) when Americans were interested in all things fraternal. Theatrical staging spread faster in the Northern Masonic Jurisdiction than in the Southern Jurisdiction, but it was a movement that couldn’t be stopped. American Scottish Rite bodies erected stages, painted and purchased scenery, and bought costumes to put on their degrees. They became repertory theater companies with a repertoire of 29 plays. Now when King Solomon stepped forward to speak, it wasn’t necessary to imagine his exotic dress or magnificent throne room—he stood there in purple robes with a crown, surrounded by his guards and advisors in an oriental palace of stunning opulence. (And the members got to take turns playing Solomon!) Success bred success, and Scottish Rite bodies tried to outdo each other in putting together lavish stages and extravagant productions. Theatrical supply companies competed to provide scenery, costumes, makeup, and lighting. Large cities might have stages with 100 or more drops, full lighting, a wardrobe room, a property room, and crews to keep everything running. The single center of Scottish Rite per city now became an advantage with plenty of members available to fill all of the supporting jobs in a major production, including kitchen crews, orchestras, and choirs. The conferral of Scottish Rite Degrees two to four times a year became major events, with hundreds of members and candidates gathering together. After witnessing the degrees, new members eagerly signed up to take part themselves and the cycle continued. —From S. Brent Morris, 33°, GC, Complete Idiot’s Guide to Freemasonry (2006)
I have read and agree to the Terms of Use and Privacy Policy.
I Agree