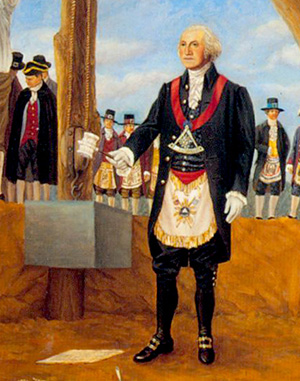 On April 15, 1791, Alexandria Lodge No. 22 (later Alexandria-Washington Lodge) laid the southernmost boundary stone of the District of Columbia. The District was originally laid out as a 10-mile square diamond with its southern tip, known as “Jones Point,” in Virginia and its northern tip in Maryland. The stone is protected in its original location and can be seen by visitors.

On October 13, 1792, “Free Masons of Georgetown and its vicinity” assembled at the Fountain Inn in Georgetown and marched to the new construction site of the President’s House and laid the cornerstone. Bro. Peter Casanave, Master of Lodge No. 9 of Maryland (now Potomac Lodge No. 5 of the District of Columbia performed the ceremony. The current location of the cornerstone is unknown.

On September 18, 1793, the cornerstone of the U.S. Capitol was laid by Alexandria Lodge No. 22 of Virginia and Maryland Lodges No. 9 and No. 15 (now Federal Lodge No. 1 of D.C.). Bro. Joseph Clark, Grand Sword Bearer of the Grand Lodge of Maryland, acted as Grand Master pro tempore, and Bro. George Washington symbolically set the stone in place. The current location of the cornerstone is unknown.