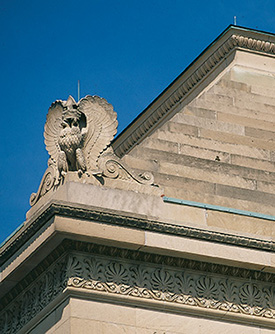 Myth! Call them magnificent, call them Scottish Rite emblems, but please don’t call them gargoyles. The 33° Double-headed Eagles on the roof of the House of the Temple (photo right) are actually called acroteria angularia, which are architectural ornaments seated on a flat base at the outer angles of a building’s acroter (or plinth). Often mistaken for gargoyles, acroteria are decorative sculptures. Gargoyles are grotesques, which include the mythical or strange creatures used in architecture. Gargoyles always have a drain pipe or water spout, which acts as a conduit to direct water off a roof and away from a building’s walls, while acroteria do not. The double-headed eagle with the 33° is the symbol for the Supreme Council of the Scottish Rite of Freemasonry, Southern Jurisdiction, U.S.A. The acroteria were sculpted by Adolf Weinmann, who also carved the Sphinxes at the Temple’s main entrance and the Egyptian statues in the Atrium. Photo: © Maxwell MacKenzie, Washington, D.C.
I have read and agree to the Terms of Use and Privacy Policy.
I Agree