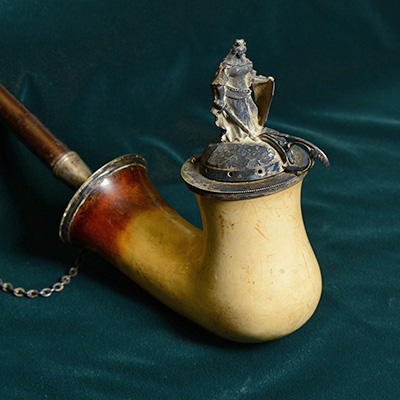 Albert Pike was a pipe—and smoking—aficionado, to say the least.  He loved his pipes, many of which were gifts from his friends and admirers. His impressive collection of Meerschaum pipes is on display in the Albert Pike Museum in the House of the Temple. Meerschaum pipes are expensive and highly-prized. Some of the pipes in Pike’s collection cost $500–$600, a significant amount—especially in the late 1800s. One of Pike’s favorite pipes is 22 inches long with a silver statuette of Germania — the personification of Germany. Wearing the Imperial Crown of the Holy Roman Empire, she carries a medieval-style shield and wields the Imperial Sword or Reichsschwert. Pike received the pipe around 1871 and presented it to the Supreme Council, 33°, on February 11, 1891. —From Jeri E Walker, A Guidebook to the House of the Temple: The History, Architecture, & Symbolism (Washington, DC: Supreme Council, 33°, SJ, USA, 2015), 100–01. Photography: Elizabeth A. W. McCarthy
I have read and agree to the Terms of Use and Privacy Policy.
I Agree