Home » Scottish Rite Myths and Facts » What is Cerneauism? 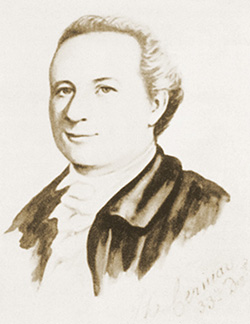 From the July/August 2009 Scottish Rite Journal: Right: Joseph Cerneau (1763–1840/45) Named after Joseph Cerneau (1763–1840/45), “Cerneauism” was a rival and illegitimate form of Scottish Rite Masonry that challenged the SJ and NMJ during most of the 1800s. Cerneau, a Frenchman and resident of Havana, Cuba, was a jeweler and Secretary of a Pennsylvania Lodge, La Temple des Virtus Theogalis. In 1806 he was appointed Inspector of the 25-degree Order of the Royal Secret (Rite of Perfection), with authority to create one new 25° Mason each year in Cuba. His patent is in the archives of the Supreme Council, 33°, S.J. In 1807 he moved to New York City with his family and affiliated with Washington Lodge No. 21 in 1810. Upon his arrival in 1807, he formed a Sovereign Grand Consistory of the 25° which attracted many prominent members, including DeWitt Clinton. After the Mother Supreme Council in Charleston created the Northern Masonic Jurisdiction in 1813, Cerneau’s Consistory put forth a Supreme Council of 33 degrees and claimed territory over the “United States of America, it Territories and Dependencies.” At one point it was limited to members of the Schismatic St. John’s Grand Lodge of New York. Later it contracted to only control New York State, encouraging the formation of independent Supreme Councils in each state, and then re-expanded to again cover the entire country. In 1853 it chartered two Blue Lodges in New York City, which may have sealed its fate as forever illegitimate. Despite its many ups and downs, the Cerneau Supreme Council became a strong rival to the NMJ, and in 1867 merged with the NMJ. In 1881, dissatisfied former members of the Cerneau Supreme Council renounced their vows of fealty, withdrew from the NMJ, and reactivated the Supreme Council for the United States of America, its Territories and Dependencies. Eventually the conflict between the Supreme Councils (primarily in the NMJ) spilled over into Blue Lodges. In the late 1800s Grand Lodges reluctantly stepped in, declared the Cerneauists illegitimate, and threatened expulsion to any Mason who continued membership. The courts ultimately upheld a Grand Lodge’s right to control what Masonic groups its members could belong to, and only then did Cerneauism come to an end.
I have read and agree to the Terms of Use and Privacy Policy.
I Agree