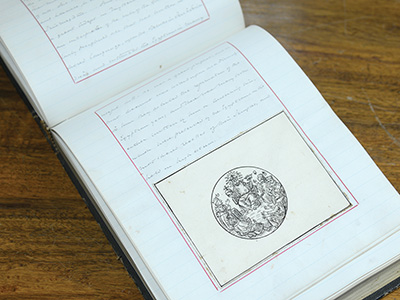 Of the many lessons and purposes of Freemasonry, one of the first we learn is that certain words have a profound importance in our rituals. Initiated as Entered Apprentice Masons, we were entrusted with a traditional word, which has symbolic importance. As we progressed we were further entrusted with other words and passwords which were likewise symbolic. We concluded our journey in the symbolic lodge by receiving a “Substitute Word,” for another word which had been lost. The higher degrees of Freemasonry, including the Scottish Rite, continue to impart symbolic information, although the significance of the symbolic words became obscured with the adoption of the Revised Standard Pike Ritual in 2000, since most of them are reserved for the so-called mandatory degrees (4°, 14°, 18°, 30°, and 32°). Does this mean there is nothing to be learned from these traditional words, which were once essential to every degree? To the contrary, they are still there, with much to tell us. One of the treasures of the Supreme Council’s Archives at the House of the Temple in Washington, D.C., is Albert Pike’s original two-volume bound manuscript of The Book of the Words. This remarkable study is an exploration of the symbolic words in Freemasonry, from 1°–32°. Pike explores their origin, meaning, symbolism, and relevance to the degrees, and by so doing he shows that they can be used to recall key elements and lessons. Originally printed in a limited edition in 1870, The Book of the Words was reprinted in 1999 by the Scottish Rite Research Society. It remains available today, and can be purchased via our online store. If you haven’t read this remarkable work, and you are curious about our symbolism (and who isn’t?), you would be well served to study this important work, so that you too can use the Rite Words to communicate with your Brothers. Funds raised through the Rebuilding the Temple Campaign will help preserve important Masonic manuscripts like Albert Pike’s Book of the Words. —By Arturo de Hoyos, 33°, Grand Cross, Grand Archivist & Grand Historian Originally published as “The Rite Words,” in the September-October 2014 Scottish Rite Journal.
I have read and agree to the Terms of Use and Privacy Policy.
I Agree