MEMBER LOGIN
We are open for visitors & tours! Please check out our “Planning Your Visit” page for more information. MASKING UPDATE (12/21/21): The D.C. Mayor's office has reinstated the indoor mask mandate; therefore, **masks are required** for everyone—regardless of vaccination status. 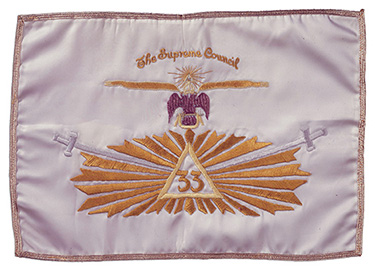 The Americanism Museum at the House of the Temple is home to two Scottish Rite banners that went into OUTER SPACE! The one shown here traveled with Astronaut and Scottish Rite Mason, Leroy Gordon Cooper, 33°, on his Gemini 5 orbital mission in space in 1965. Cooper, command pilot of Gemini 5, along with fellow astronaut Pete Conrad, flew an eight-day, 120-orbit mission traveling a distance of 3,312,993 miles and establishing a new space endurance record of 190 hours and 56 minutes, breaking the Soviet Union’s Vostok 5 record. Prior to his Gemini 5 mission, Cooper set several new milestones for the space program. He flew 22 solo orbits and another 122 orbits as a Command Pilot. He was the first astronaut to complete a pilot-control re-entry and the first to track a typhoon from space. Also, in 1963, Cooper gave one of the opening addresses to the first meeting of the League of African Nations using the first television camera in space.
I have read and agree to the Terms of Use and Privacy Policy.
I Agree