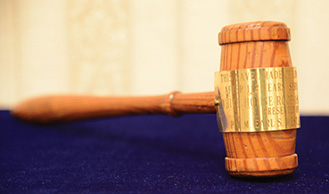 Despite the common appearance of this Masonic gavel, it has the uncommon distinction of being crafted from the wood used to rebuild and restore the White House roof after the British Army burned it in 1814 during the War of 1812! The longleaf pine spent 112 years in the White House roof before it was repurposed. The gavel was presented to James M. West, then donated to the Supreme Council by Past Worthy Patron Earl S. West, 32°, KCCH, in 1974. (Photography: Jeri E. Walker)
I have read and agree to the Terms of Use and Privacy Policy.
I Agree