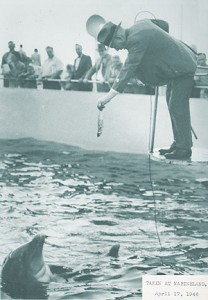 Some of the most interesting pieces of history found at the Supreme Council are hidden deep in the basement. In fact, if you just wander the halls of the House of the Temple, you won’t even see them. They are stored in rooms that seldom see the light of day. As with any museum, a significant portion of our holdings are (sadly!) located in storage. (This is normal at any museum and is due to the fact that there is only a fixed amount of display space for items.)

Over the years, each Grand Commander has collected hundreds, if not thousands, of items which have become part of the many collections at the House of the Temple. The Grand Commanders’ collection ranges in items from the most precious Masonic jewel to a rare edition of a Masonic volume. This collection also changes as the leaders change. While Ill. John Henry Cowles, 33°, (GC, 1921–1952) had hundreds of Masonic trinkets, Ill. Henry C. Clausen, 33°, (GC, 1969–1985) had items related to spirituality and science, and Ill. C. Fred Kleinknecht, 33°, (GC, 1985–2003) had all sorts of golf paraphernalia. One of our favorite recent acquisitions was presented to the current Grand Commander—a bobble-head doll in his likeness! (I am not joking!) 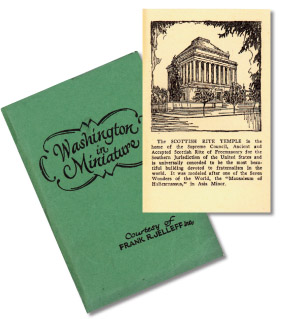 What are the “best” things in this collection? That’s hard to say, and of course would be a matter of preference. If you are talking monetary value, then it would be one of our rare Masonic jewels. But, if you are talking “rare” or unique, then it might be one of the volumes of literature or maps. The Grand Commanders’ treasures include letters, patents, photographs, manuscripts, rituals, artifacts, and various Masonic and non-Masonic memorabilia. Personally, I like the ceramic collection which SGC Cowles accumulated, which includes over two hundred interesting pieces.

Photo:“In the days of GC Cowles, a visitation by the Sovereign Grand Commander often made the headlines of local newspapers.”

Cowles maintained journals of his adventures, but his corresponding scrapbooks are unique in their recollection and depiction of 20th-century American history. Our museum has twenty-five leather-bound volumes with the Scottish Rite’s double-headed eagle embossed on the cover. These beautifully bound books contain hand-drawn artwork of Masonic symbols on the title page and handsome calligraphy throughout. These treasures are one-of-a-kind and emphasize the importance the fraternity has had in American history. I think that the albums kept by SGC Cowles have the most interesting historical information about Masonic activities that occurred during his lifetime.

Inside the scrapbooks are a variety of artifacts including newspaper clippings, photographs, autographs, personal letters, postcards, and more. In the days of GC Cowles, a visitation by the Sovereign Grand Commander often made the headlines of local newspapers.

John Henry Cowles, 33°, Sovereign Grand Inspector General in Kentucky and Sovereign Grand Commander of the Supreme Council, 33°, Ancient and Accepted Scottish Rite of Freemasonry, Southern Jurisdiction, USA began his Masonic career by petitioning Louisville Lodge No. 400, F. & A.M. on July 6, 1888. He collected ephemera throughout his entire time as a Mason. Stay tuned for future highlights from his scrapbooks of these unique archival materials.