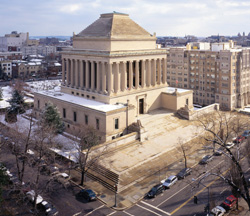 The Building and the Foundation

The House of the Temple on 1733 Sixteenth Street NW, Washington, D.C., is the headquarters of the Scottish Rite of Freemasonry, Southern Jurisdiction (Mother Council of the World). Designed by famed American architect John Russell Pope, the building is an architectural masterpiece and is home to impressive libraries, diverse museums, and ceremonial rooms. The House of the Temple Historic Preservation Foundation, Inc., was established to support and preserve this magnificent building as an architectural landmark, national center for learning, and tribute to Masons, past, present, and future.

The Rebuilding the Temple Campaign

The House of the Temple celebrates its 100th anniversary in 2015. Leading up to this landmark year, the Historic Preservation Foundation plans to raise funds to restore the building and expand upon its ability to serve as an education center. Currently, the House of the Temple’s libraries, museums, and archives house priceless relics, ancient books, and memorabilia from influential Americans such as George Washington, Benjamin Franklin, and Dwight D. Eisenhower. However, many artifacts are not presently displayed in an appropriate setting or stored in the proper environmental conditions. It is the goal of the Foundation to launch the Rebuilding the Temple Campaign to resolve these issues and to fully restore the House of the Temple. With the guidance of the Rebuilding the Temple Campaign Advisory Panel, a select group of Scottish Rite leaders, we will ensure the ultimate completion and success of the House of the Temple’s Campaign.

Following this Campaign, and the needed restoration work, the House of the Temple will serve as a national center for education, historic preservation, events, and tourism for fellow Masons and all Americans. Visitors from around the world will learn about the Masons and their influence in shaping our nation. Similar to the Washington Monument and the Lincoln Memorial, the House of the Temple will be a national landmark. It will also become a premier venue for conferences and events for Masons, dignitaries, and scholars. The completion of the Campaign will preserve the legacy of Masons in American history, enlightening others and promoting Freemasonry to the next generation.