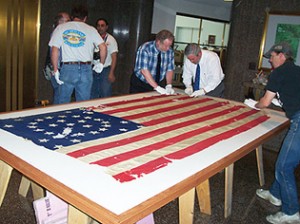 The Civil War flag on display at the Library of the Grand Lodge of Iowa is a truly unique item. It is in irreplaceable artifact from the past that transcends space and time to help us connect with events that took place almost 150 years ago. As a museum curator, I always look forward to finding that hidden treasure that may be lurking in our midst. It may be hidden in an attic somewhere, placed lovingly into a family trunk years ago and forgotten. This flag was not so much forgotten, because it was used in parades and other patriotic celebrations, as its significance was overlooked. This is a real treasure, an important reminder of events long ago that is present for us today. It will continue to serve as that reminder because it has been so well preserved.

The flag was made in Marengo, Iowa, a small town located southwest of Cedar Rapids, in Iowa County. It was made by the women of Marengo, no doubt as a patriotic gesture when the Civil War began. If you get the chance to visit our library, you can look at the intricate stitches that were made, even the unique pattern where the stars were placed. We do not know the names of the ladies who made this flag, but they were probably not unlike others in small towns all over this country, both North and South, who were caught up in the patriotic fervor that swept the nation at the beginning of the War. When the 28th Iowa Volunteer Infantry was organized in 1862, the flag was presented to Company B of that regiment, undoubtedly because many of the members of Company B were from the Marengo area. One of the organizers of this company was Bro. James T. Sargent, later appointed 1st Lieutenant of Company B. He was also a Master Mason.

The flag accompanied the unit as it was mustered into Federal service in October 1862 at Camp Pope in Iowa City. It went with the regiment as it traveled to Davenport, Iowa, and then to Helena, Arkansas, where the unit spent the winter of 1862–63. Some of the men of the 28th Iowa described that winter as one of the most depressing of their wartime experience. This was due to freezing temperatures, snow, rain, and ice and very little shelter to protect the men. Many died as a result of illnesses they incurred.

By the spring of 1863, the 28th Infantry joined other Union regiments of General Grant’s army in the campaign to capture Vicksburg, Mississippi. This Confederate-held fortress was a key to controlling the Mississippi River. Several battles took place leading to the eventual siege and fall of Vicksburg in July 1863. One of the more important battles was the one fought at Champion Hill on May 16, 1863. It was here that this flag suffered some of the damage that you can see. As the two armies pushed each other back and forth across the battlefield, the flag was torn by shot and shell. The color-bearer was wounded and some of his blood stained the flag as he fell to the ground. This stain can be seen just to the right of the blue field at the top of the flag. The Union Army prevailed at the Battle of Champion Hill, with the 28th Iowa sustaining 97 casualties. In the official report to the Adjutant General regarding the 28th Iowa’s participation during this battle, it was written, “the 28th has added new laurels to the noble young State of Iowa, and will continue to do so.”

After the Vicksburg Campaign, Lt. Sargent resigned his commission and returned to Marengo. It is thought that he brought the flag back with him, as it does not carry the “battle honors” on it that were traditionally sewn, or painted onto the flag.

After the war, when Company B was discharged, the flag remained with Lt. Sargent. He eventually moved to Yankton, Dakota Territory, and took the flag with him. The flag was used in many parades and patriotic events. At the death of Lt. Sargent, the flag was passed on to his son, Ill. William F. Sargent, 33°. Bro. William became a Master Mason, like his father, and served as Grand Master of South Dakota in 1929–30. Bro. Sargent passed on the flag to Oriental Consistory where it was carefully stored in the Yankton Masonic Temple for many years.

Realizing that a historic flag of this significance belonged in its home state, Ill. Charles Kaufman, 33°, Past Grand Master of South Dakota and SGIG in South Dakota, presented the flag to Grand Master Robert H. Erickson at the annual communication of the Grand Lodge of Iowa on September 17, 2004. Brother Erickson accepted the flag on behalf of the Masons of Iowa. A standing ovation was given in tribute to the brothers of South Dakota in appreciation for returning the flag to its home state of Iowa.

The flag is now carefully stored under museum conditions to preserve the delicate fabric. It is displayed at the Grand Lodge of Iowa building in Cedar Rapids as a tribute to the brave men of Iowa who volunteered to serve their country.