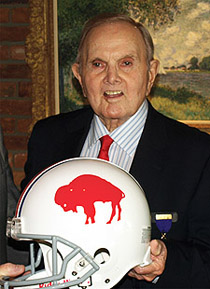 Fifty years ago eight men, including Ill. Ralph C. Wilson, 33˚, formed what was affectionately called “The Foolish Club” but, in reality, was something truly remarkable.

They created the American Football League which joined with the established NFL in the late 1960s to play the Super Bowl and in 1970 merged with them, molding professional football into what it is today. Bro. Wilson purchased the franchise for the Buffalo Bills at the very start, and half a century later is still at the helm.

Bro. Wilson is very successful with his football team. The Bills won the AFL title twice and, later, the AFC championship four years in a row. He is very humble, however, about what he has accomplished.

He explains that you must prepare and you need to keep your eyes on things, but he also points out that he has been very lucky. “Sometimes you need to be in the right place at the right time.”

He illustrated his point with a story of his experiences in the Second World War. He was in charge of a mine sweeper. At one point the ship was trapped in a bay with no cover, and the German Luftwaffe was dropping bombs hoping to sink them.

He says there was little they could do, but every one of the bombs missed his craft, “otherwise we wouldn’t be sitting here having this conversation today.”

On Jan. 15, 2004, a devastating fire tore through the Masonic building in Bangor, ME, destroying 135 years of history and the meeting place for a lodge, the Scottish Rite Valley, the York Rite, DeMolay, and Eastern Star.

Undaunted, the learning center re-opened within days, in temporary space.

Now, their nomadic existence is over. Freemasonry once again has a home in Bangor. The new Maine Masonic Center opened in April at the former Bangor Theological Seminary. The three-acre site includes what was once a chapel which has been renovated for Masonic use. The large classroom above the chapel has become the new learning center. Director Patricia Martz told the Bangor Daily News, “This building gives us a home again. We felt like refugees for the six years we were burned out.” The center tutors about 40 children each year and has served 61 communities.

If you have never done the puzzle, you are in for a treat. Also, it is time to think about stocking stuffers. Orders received by Nov. 30 are guaranteed to be delivered by Christmas.
For a $6 check, made out to “Supreme Council,” we will mail you Masonic Word Math Puzzles, from the pages of The Northern Light. Send your order to: The Northern Light, PO Box 519, Lexington, MA 02420.

All profits from the sale of the book will benefit the Almoners Fund.