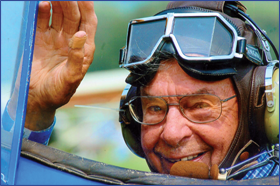 Ill. A. James Bryden, 33°, Secretary for the Valley of Williamsport, PA, reports that his Valley traditionally recognizes its members with extended service. Every once in a while a unique story accompanies such a ceremony. On October 28, many members received pins for 50, 60, 65, and 70 years in the fraternity. Usually those recipients who can not attend ask that their award be mailed.
One member, who could not attend in person, was Bro. George A. Levis. He explained that he was not able to drive because he was 100 years old, and he lived in Baltimore.

The Commander-in-Chief, Ill. Gregory C. Wenrich, 33°, decided that his pin should be hand-delivered, rather than mailed. He called Bro. George, who was now 101, and told him that he would arrive “on Friday.” George Levis respectfully declined, stating that “Fridays are not possible. I go flying with friends on Fridays.” Instead, he told him that he would be in Williamsport in January, so arrangements were made to make the presentation at that time.

Flying, apparently, is George’s passion and has been since he was a young boy in Ireland. One day in 1918, he spotted a Curtis Seaplane over Whiddy Island, off the Bantry coast, and he was hooked. In May 1926, at the age of 16, he made his way to America to pursue his dreams. By 1928, just a year after Charles Lindbergh’s solo flight over the Atlantic, Levis learned to fly. He’s kept his eye on the sky ever since.

His career never strayed too far from the air. He began work on an aircraft assembly line and eventually became a demonstrator pilot. As a sideline and hobby he restored old planes. He also owned his own aircraft for more than two decades.

A new exhibition at the Scottish Rite Masonic Museum and Library, located at Supreme Council head-quarters in Lexington, MA, aims to trace the fashionable inspiration behind traditional Masonic costumes and regalia.

Using garments and images from the museum’s collection, the exhibition explores four categories – contemporary fashion, the military, Orientalism, and theater – to show the connections between everyday style and Masonic fashion through the years.

The exhibition is on view June 2011 through early March 2012. If you have questions about the exhibition, or the museum in general, contact Aimee Newell, Ph.D., director of collections, at anewell@monh.org.

Scottish Rite on the Red Carpet

Last year’s annual meeting in Philadelphia featured the premiere of A Scottish Rite Tribute to the Flag, a video presentation produced by the Northern Masonic and Southern Jurisdictions. The Supreme Council of the Northern Masonic Jurisdiction has been informed that the program won a prestigious CINE Golden Eagle Award. It is considered by many to be the top recognition for non-broadcast programming. The award came in the “Professional Non-Telecast Non-Fiction Division.”