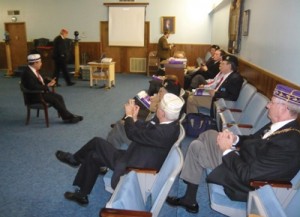 They assured me that snow in Asheville was rare. So I tried to escape Washington, D.C.—where we had the snowiest winter in recorded history—to Asheville, only to find seven inches of the same accursed stuff. Fortunately for me, while the city of Asheville was cold and snowy, the Valley of Asheville was hot and alive with Masonic education.

It all started about a year ago when Bro. Scott Traxler, KCCH, visited the House of the Temple. Scott has the energy and posture that identify him as a typical military man, a retired Sergeant Major in the Army to be precise. But Scott is not typical—most Sergeant Majors don’t have a handful of master’s degrees and a Ph.D.!

After touring the building, he stopped by my office to have a quick chat about the Master Craftsman Program and to float a couple of ideas he had. Our “quick chat” lasted over an hour.

Inside and outside of the military, Scott was a teacher by trade, and it turned out he and I had been thinking about the future of Scottish Rite in the same way – that Masonic Education was the key to retaining and providing value to our membership. More specifically, we agreed that the social nature of the Scottish Rite made group study essential to those goals. After our meeting, Scott went back to Asheville, and I got busy with other things.

Scott had not forgotten our conversation, though. And soon after, while at a Masonic event in North Carolina, he bumped into Ill. Bill Brunk, SGIG in North Carolina. Scott explained his vision for Scottish Rite Education and was promptly appointed the Orient Education Director. In true form, Scott immediately set up a Master Craftsman group study program in the Valley of Asheville.

His initial class was of about 20 brothers and, interestingly, a bunch of “auditors,” brothers that just showed up to listen and participate in the question and answers. There were young guys and new members as well as guys who had been around for years. They all wanted to learn more about their fraternity. Scott was confident about success, but he never expected this. He called me right away shared his experience.

So that brings us back to a snowy March 2nd when I went to Asheville to see him in action. I brought along Ill. Arturo de Hoyos, 33°, GC, the world famous scholar and Grand Archivist and Historian of the Supreme Council, to talk about Freemasonry with their class.

At first, things looked grim for our meeting. The forecast had called for 3–4 inches of snow, but 7 inches was closer to the total. By the time we assembled for the Master Craftsman meeting, there were almost a dozen who had braved the snow and gloom of night.

Scott carefully led the group through a quick lecture on the 32° and then introduced Ill. de Hoyos as the “visiting professor.”

Bro. Art gave a repeat performance for the regular Valley meeting that followed, and by this time our group had doubled. The discussion touched primarily on the history of our ritual and the circuitous route it took to Charleston, S.C., in 1801. We hardly noticed the time had gone past nine-o’clock; they were hungry for education and they weren’t going to waste such an opportunity.

The next morning, as I flew home with Art, we talked about what we had learned. We learned our Brethren really want knowledge, their pleas for additional light were real, and they would even drive through a snow storm to get it. And we learned that one leader can make a difference through his dedication and desire for that light, even if nature conspires against him.

If your Valley would like to set up a group study for the Master Craftsman Program, contact me at jvandyke@scottishrite.org or 202-777-3123.