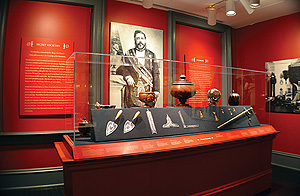 Photo: The Masonic exhibit, including a portrait of the King in full 33° regalia. The calabash bowls, towards the rear, are jubilee artifacts which were utilized in State celebrations, during Kalakaua’s reign. (Photograph by Mark Leo, 32°)

Amid the fading daylight of a March evening in Honolulu, on the sacred land of an area the Ancient Hawaiians once referred to as Pohukaina, a unique and auspicious procession somberly and reverently made its way across the grounds to the lower galleries of Hawaii’s most audacious and recognizable Royal residence—‘Iolani Palace. Ceremonially ushered by members of the Royal Order of Kamehameha the Great in accordance with protocols afforded to the high chiefs of old, esteemed representatives of Hawaii’s Grand Lodge, and Hawaii’s three oldest lodges—Lodge Le Progres de L’Oceanie, Hawaiian Lodge, and Honolulu Lodge—joined Hawaiian cultural practitioners, members of the University of Hawaii, and the Palace’s curatorial staff to browse a newly-created public exhibit highlighting the Masonic activity of King David Kalakaua, P.M., 33°

David Laʻamea Kamanakapuʻu Mahinulani Nalaiaehuokalani Lumialani Kalākaua reigned over the Hawaiian kingdom from 1874 till his death in 1883. He was the last of Hawaii’s kings, and was affectionately referred to as the “Merrie Monarch,” in light of his magnanimous personality, his good humor, and his love of culture and finery.

Hawaiian culture experienced its first resurgence under the Kalakaua Dynasty. Hula, surfing, and lua—the ancient Hawaiian martial art—were revived and rejuvenated after having been outlawed for several decades. Arguably, Hawaii experienced its most politically aggressive move towards international cosmopolitanism under Kalakaua’s influence, because the King’s ambitions were not relegated exclusively to the islands themselves. In 1881, Kalakaua left Hawaii to tour the world, in an effort to improve Hawaii’s foreign relations and to expand its economic influence. He became the first Hawaiian Monarch to successfully travel the globe, visiting heads of state in Japan, China, Siam, Burma, India, Europe, Great Britain, and Ireland along the way. He became the first Hawaiian to gain audience with Pope Leo XIII, he dined with Queen Victoria, and he discussed trade policy with President Chester A. Arthur.

While on his travels, Kalakaua grew fond of the royal residences in Europe and the United Kingdom. He began to envisage a Hawaiian Palace of equal prestige and grandeur. Progressively, the King acquired furniture and art from Europe, and commissioned the construction of ‘Iolani Palace for a then-unprecedented sum which exceeded $340,000. The result was a unique and distinct architecture known as American Florentine, which incorporated American, European, and Hawaiian design flourishes.

King David Kalakaua was also a Brother Mason who rose among the ranks of his Lodge’s administration at the same time he came into political prominence. Master of Lodge Le Progres de l’Oceanie in 1876, Kalakaua retains the extraordinary distinction of being one of the few Monarchs in history, outside of Europe, to preside over a sovereign country and a Masonic Lodge simultaneously. A Mason of unequaled passion, he was among the first 33° Masons in the Orient of Hawaii, but also actively delved into the mysteries of the York Rite and the Shrine. As well, his Masonic activities were no secret to those who kept company with him. Not only was the newly-completed Palace’s first formal dinner a Masonic event, but also portions of the Palace’s attic was converted into a Lodge meeting space and an impromptu Masonic Temple.

Creating an exhibit which prominently features the Masonic lifestyle of King Kalakaua was the result of a unique collaboration between Lodge Le Progres de l’Oceanie’s Archival & Conservation Committee and the curatorial staff of ‘Iolani Palace. By inviting members of Hawaii’s cultural, academic, and social communities to its opening reception and in virtue of its prominent place among all of the other galleries at the Palace, the display represents an important first step towards publicly sharing the topic of Freemasonry in a way that is culturally relevant to the people of Hawaii. Though Masonic artifacts of Hawaiian Kings and Chiefs have been included in prior temporary public displays (not only at the ‘Iolani Palace galleries, but as well at Honolulu’s Bishop Museum), never before has so much time, resources, or attention been devoted to educating the community at large about Hawaii’s colorful Masonic history by any independent research institution.

Included in the installation are the ceremonial trowels, level, plumb, and square, which in 1879 commemorated the laying of the Palace’s cornerstone. These delicate instruments rest adjacent to the King’s Past Master’s Jewel, and the Past Master’s Jewel of his trusted advisor John Dominis. The King’s Master Mason ring, ornate with precious stones, sits accompanied by his Templar sword, and his York Rite watch fob—all tarnished with age, but rich with significance. A Lodge roster which includes Kalakaua’s name, as well as that of Kamehameha IV, hangs near a photocopy of the King’s original application for membership. And, most prominently, a photograph of Kalakaua himself, proudly posing in full 33° regalia, watches over the exhibit in silent dignity.

Masons in Hawaii are the beneficiaries of a remarkable inheritance. They are stewards of a long and rich heritage—a heritage that does not merely extend to Masonic ritual and ceremony, but also to a unique cultural, ethnic, and historical pedigree. Though it may not be widely known, it is a fact that Freemasonry and Freemasons are interwoven into Hawaii’s identity as a State, and as a once-great sovereign nation. The earliest lodge in the islands was formed in 1843. However, brother Masons made frequent arrival to Hawaii as merchants, tradesmen, sailors, and missionaries, perhaps as early as the 1820s. From the mid-nineteenth century and onward, the appeal of the Craft soon caught the attention of the Royal House of Kamehameha. And, from the time of Kamehameha III, Freemasonry became a tradition among the Hawaiian Aristocracy. From the early-1800s until the abolishment of the monarchy in 1893, practically every Hawaiian monarch and statesman, as well as their closest advisors, was either a Freemason, or had a direct Masonic association. Shortly after the overthrow of the Hawaiian Kingdom, the establishment of a Hawaiian Republic was, as well, ushered in with the help of brother Masons.

Hawaii is steeped in Masonry. Whether they were native Hawaiians, or the sons of missionaries, settlers, and immigrants, Masons in Hawaii were men of principle, men of prominence, and men of passion. Like all brothers before them or since, they accumulated moral strength and purpose by obligating themselves to the mysteries of the Craft.

More than any mere historical exposition, the ‘Iolani Palace’s Masonic exhibit reaffirms the substantial link between Hawaiian culture, Hawaiian history, and Freemasonry. This link, until recently, had languished into relative obscurity. The opportunity to not merely reveal but revitalize the strong connection between Hawaiian history and Freemasonry has encouraged a new appreciation among the brethren across the state of Hawaii.

King David Kalakaua was a patriot, an icon, a brother, and an exemplar worthy of emulation. In large part, it was not his status as a monarch, but the quality of his intentions and his sincere love of his people and his country that elevated his reputation to the status and esteem with which he is regarded today. Such reflects the caliber of not just a good Mason, but a good man. King David Kalakaua was a man who lived his life in accordance to the guidance of his conscience and the precepts of the Craft and in so doing helped to define and to solidify the heritage of Hawaii and its people.