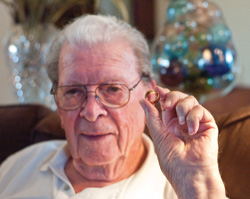 By Ric Carter from The North Carolina Mason, Sept/Oct 2010

SHALLOTTE, N.C. — This fish tale does not involve size exaggerations about the one that got away. This fish tale is about many years and a thousands-of-lakes, millions-of-fish long shot. It’s a tale of Albert, the Northern Pike—the one who didn’t get away.

Back in the 1950s, Bro. Don Browning, 32°, and a buddy Mason who lived three doors down, went fishing every summer. They did it the rugged way, backpacking in canoes through the myriad wilderness lakes around Parry Sound in Canada’s Ontario Province. They made the trip every year for ten or more years. Exact dates are today hazy.

Browning is not quite sure what year it happened, but one of those years in the late ’50s, after the trip, he realized he had lost his Scottish Rite ring. The ring was the standard issue gold band Scottish Rite Masons get for completing the 14th Degree. He had gotten the ring in 1956 when he joined the Rite in Cincinnati.

“I had no idea where it went,” says Browning. “One of those lakes, we overturned the canoe when we put it up on a big rock. Everything went in. Only the paddles and our backpacks floated. It was maybe ten feet deep. That may have been where I lost it.”

Here, we must enter speculation to some extent, though the evidence is there. Northern Pike are known to hit flashy metal lures, those which capture the glint of a high sun and reflect it from a fresh angle like the scales of a tasty minnow.

We know not how long Albert carried the ring in his gut, but his fondness for shiny gewgaws proved his undoing and the end of his role in this story. A fisherman named Armstrong, in a year lost in the murk of retold tales, caught our Albert Pike. He apparently made an appealing breakfast picture. Armstrong cleaned Albert, and in cleaning the fish made the remarkable find of the (to him) mystery ring.

Not being a Mason, Armstrong did not recognize the ring. After some searching, he tossed the ring in a jewelry box and forgot it. The ring passed along to his son Jake Armstrong. Jake tossed it in his wife’s jewelry box where it sat for several more years.

One day, Jake’s wife showed the ring to her brother, John Emrick, and turned it over to him to try to find the owner. Emrick was a Mason and recognized the ring for what it was. Emrick, now Masonic district secretary of Nipissing East District in North Bay, Ontario, began his search in 1994. He later enlisted the help of Grand Secretary Terence Shand at the Grand Lodge of Canada in the Province of Ontario.

The search was not simple. Don Browning has lived in several states, moving nine times in the years since he last saw his ring. Early in 2010, the trail ended in Shallotte, North Carolina, where the 92-year-old Browning now lives. Browning is still a member of the lodge he joined in 1955, Washington No. 58 in St. Albans, West Virginia.

During the summer, Grand Secretary Walt Clapp of North Carolina received the ring in a package from the Grand Lodge of Ontario. Clapp drove to Browning’s home in Shallotte to deliver the ring in person.

There, along with Browning to greet the ring were several friends and neighbors. Some were Masons, and all marveled at the finding and return of the Masonic ring.

The ring is finally home, very little the worse for wear, bearing a few scratches easily imagined to be the engraving of Albert the Northern Pike’s teeth; a mark of the ring’s long and marvelous journey.