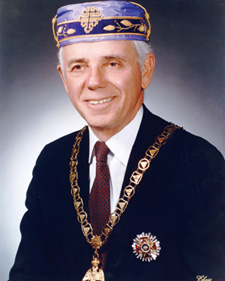 IN DEO FIDUCIA NOSTRA FROM THE GRAND ORIENT OF HEREDOM AT WASHINGTON, DECEMBER 1, A.L. 6011

To all the Bodies and Brethren of the Ancient and Accepted Scottish Rite for the Southern Jurisdiction of the United States:

DEAR BRETHREN: A great affliction has fallen upon us—the sharp blow of an expected and grievous calamity.

of Maryland, our Past Grand Commander, will be seen by us no more in this world. It was not so long ago, when our Supreme Council closed, that he stood in the circle of the brethren around the altar and repeated with them the solemn words of parting: “It may be that we shall not all again assemble together in Council.”

Bro. Kleinknecht was born February 14, 1924, in Washington, D.C., where he graduated from their public schools. His major interests were writing and business, but World War II descended and put an end to his transition from classroom to commerce. He served in the Navy and, with millions like him, gave to the world the precious gift of freedom.

In 1947, he took a job at the House of the Temple, learning the Scottish Rite from the ground up. This hands-on approach remained the trademark of Fred, as he liked to be known, throughout his fifty-six years at the Supreme Council. Within a year of joining the Temple staff, he married his childhood sweetheart, Gene Elizabeth Kamm, a life-partner in the truest sense, and they had four children: Gene Ellen, Henry, Scott, and Joan. Gene’s confidence in Fred’s potential was the turning point in his life, and with her encouragement and support, he studied accounting at Benjamin Franklin University.

In 1949, he began his Masonic journey in Maryland’s Silver Spring Lodge No. 215. He joined the Scottish Rite in Baltimore in 1950, received the rank and decoration of a Knight Commander of the Court of Honour in 1955, and was coroneted an Inspector General Honorary of the Thirty-third Degree in 1959. He was also a member of Mt. Pleasant Chapter No. 13, R.A.M., King David Council No. 19, R.&S.M., St. Elmo Commandery No. 12, K.T., Boumi Shriners, the National Sojourners, and many, many other Masonic organizations.

In the Supreme Council, Fred applied his education to reforming the bookkeeping methods, quickly saving the Rite tens of thousands of dollars. His initiatives demonstrated his leadership potential. From accounting, he moved up through numerous administrative positions at the House of the Temple.

By 1966, the then current Grand Commander, Luther A. Smith, placed Fred in positions of increasing responsibility, leading to his appointment as Assistant to the Grand Commander on January 1, 1966, and Acting Grand Secretary General on January 1, 1967. The Supreme Council endorsed Bro. Smith’s confidence and elected Fred Grand Secretary General and SGIG at-large on September 28, 1967. He served in this position for nineteen years until the Supreme Council elected him Sovereign Grand Commander on October 23, 1985.

Immediately, Fred set about repositioning the Order within the context of a changing world. To accomplish this mission, Fred sought quality. He said, “Because Freemasonry lives not just for today, but for generations to come, we must be first class in whatever we do.” Working closely with his staff, Fred initiated profound innovations in every area of Scottish Rite endeavor and brought an Ancient and Accepted Order into the new millennium.

Fred knew that building strength for tomorrow’s Rite meant growing financial support today. He rebuilt the Rite’s endowment infrastructure and helped generate forty-seven state and local Scottish Rite foundations. His commitment to securing a sound financial future benefited the House of the Temple itself. He established the House of the Temple Historic Preservation Foundation, Inc., and in just twelve years, its endowment enabled construction of the Pillars of Charity Alcove and the Scottish Rite Hall of Honor to recognize major donors.

The annual Scottish Rite Calendar Program, an effort Fred began in 1989, has enabled much-needed improvements in the House of the Temple, including reconstruction of the Temple’s damaged grand entrance steps and completion of the Cornerstone of Freedom Hall, the Hall of Scottish Rite Regalia, the George Washington Memorial Banquet Hall, the Burl Ives Room, the Americanism Museum, the Albert Pike Museum, and the total renovation of the Rite’s most valuable scholarly resource, the Supreme Council Library. In 1991, Fred approved the creation of the Scottish Rite Research Society and supported it in word and deed, becoming member #1.

At home in the U.S., the Rite responded to a nation in need. Immediately following the terrorist attack on the World Trade Center and the Pentagon, the Southern Jurisdiction pledged $1 million to the Families of Freedom Scholarship Fund to assist children and spouses of 9/11 victims. Fred encouraged the expansion of the RiteCare® Speech and Language Disorders Clinics with direct and indirect support.

These few facts, briefly sketched, highlight only a small portion of Ill. C. Fred Kleinknecht’s service to the Supreme Council, 33°, for the Southern Jurisdiction, U.S.A. His eighteen-year tenure as Grand Commander was exceeded only by Grand Commanders Albert Pike and John Henry Cowles. A family man who valued his wife, children, and grandchildren above all else, Fred extended that love and loyalty to his church, country, Freemasonry, and, most of all, to the Scottish Rite. Rapid and resolute, he rejuvenated the Scottish Rite and inspired dynamic activity in every area of our order’s mission. The Kleinknecht legacy of leadership will inspire us for years to come.