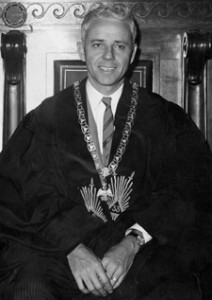 I write on a gray rainy day in December. It’s early morning, and the sun is struggling against low clouds which portend a dreary day in Washington. However, the House of the Temple is quite busy at this early hour. We are preparing for the funeral service of Past Sovereign Grand Commander C. Fred Kleinknecht, 33°. It will be a service celebrating the life and legacy of Grand Commander Kleinknecht and his unparalleled service to Scottish Rite Freemasonry. This will be our moment to say goodbye to “Brother Fred.”

As a result of his long tenure as Grand Secretary General and later as Sovereign Grand Commander of the Supreme Council, 33°, for the Southern Jurisdiction, U.S.A., Fred made many friends throughout the Jurisdiction—indeed throughout the entire Masonic network worldwide. “Never met a stranger” would aptly describe Fred’s gregarious and friendly persona to the many people he met in his travels. Fred would often return with stories of a new acquaintance, a new friend, or a discussion that took place in the most unusual of circumstances. Fred never missed the opportunity to share his enthusiasm for Masonry and its potential for good among men.

In my own experience as Sovereign Grand Commander, I would often encounter someone who inquired of Fred and how he was managing in retirement. Then would most likely follow a “Fred story,” the relating of an experience with Bro. Kleinknecht. Most common to these stories is the raconteur’s remark of how Fred chose to take the time to help someone along the way, to ease another’s burden, or to assist someone in taking advantage of an opportunity presented to them. Often the stories were about giving someone a new start or a new lease on life. Sometimes it consisted merely of believing in someone when they no longer believed in themselves or were plagued with self-doubt. And, almost universal to these encounters is the closing comment, “You know, he didn’t have to do that.” These thoughts are all alive and active in my memory as I wait for the Grand Commander’s last return to the House of the Temple on this chilly and rainy December morn.

There are many degrees in Masonry that cause us to reflect upon our own mortality and legacy. The Master Mason Degree certainly comes to mind as does the Perfect Master of the Scottish Rite, to be sure. At every turn we are admonished that death is ever present and is the foe that we must all face. Victory lies only in a life well-lived and grounded upon faith, virtue, and dutiful obedience.

As we see one after another of our comrades laid to rest, we are necessarily called to consider what we wish to be said or remembered about our time on earth. What accomplishments will we be noted for and what is our contribution to the overall good of mankind? In short, what will be our legacy? And this is truly an evolving legacy as our final chapter is being written day by day, year after year, as we live our lives.

C. Fred Kleinknecht lived this creed. Like all humans, he could be prone to error and sometimes fell short of his goal. The same is true for all of us. But he fixed his eye on the long view and knew that a man’s worth will ultimately be measured in the eyes of those that survive him—friends, comrades, and certainly his family. And, finally, in the hearts and minds of those countless numbers of people he has helped along the way.

Yes, “Fred stories” will be plentiful on this day, maybe mixed with a laugh or a tear. No doubt someone will exclaim, “He didn’t have to do that for me.” No, perhaps not. But he did. He took the time to care. His legacy is written and he continues to live in the many lives he touched over his lifetime. Paraphrasing St. Paul is appropriate: He has fought the good fight, he has finished the course, he has kept the faith.

Grand Commander, farewell and may God speed and guide
you home.