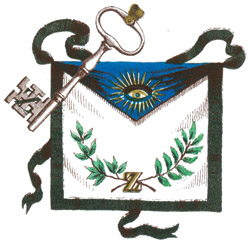 I will never forget my first real impression of the Scottish Rite. I was sitting in the third row of the beautiful auditorium in the great temple in Guthrie as one of 100 candidates in my class. I had longed for this day for three years. Many of the Masons in my small town were active in the Scottish Rite. They performed as one of the Valley’s degree teams and their stories about Guthrie, the temple, and the Rite had made a deep impression on me. As I was in college at the time, three years would elapse between my Master Mason Degree and my journey through the Degrees of the Rite. It was May 1971. And I was ready to begin what I always knew would be the college course in Freemasonry.

One might think it presumptuous of a young man who had only witnessed three Masonic degrees in the three years he had been a Mason (those being his own) to assume there was more to Masonry. But my father had only one book in his Masonic library. And that book was Albert Pike’s Morals & Dogma. He had received it himself as a candidate of the Rite years earlier. By the time I was in the 8th grade, I had read M&D in its entirety. It was a book that was important to my father; therefore, it was important to me. Of course, I didn’t understand 70% of its content at the time, but I intuitively felt it was the most important book I had ever read.

So, at age 23, I was beginning a journey that I had already dreamed of taking for at least a decade. And, to my delight, I was blown away by something that was said in the very first degree of the Rite I saw.

In the old ritual being used in Guthrie at that time, the Senior Warden, at the beginning of the 4° ceremony, says, “I have passed from the square to the compasses.” Then, the Venerable Master removes the square from the candidate and says:

Walk uprightly and turn not aside into the inviting paths of error. You now have passed from the square to the compasses, as the Geometrician passes from the straight lines and angles by which he measures the surface of the earth, to the great curves and circles by which he calculates the movements of the stars. Begin now to climb the skies of spiritual knowledge, for there are Truth and the Lost Word to be found.

The presiding officer was, in effect, encouraging the candidate to soar from his own earthly preoccupations toward the higher spheres of spiritual knowledge.

I was literally transformed as a Mason at that very moment. I could immediately envision what the future would be like for me. So moved was I by the above words that I wrote on the first page in my own copy of M&D the following: “Begin now to climb the skies of spiritual knowledge.” I had not only made a psychological break from my experience as a young man, but I took on a new understanding of the journey through the degrees of Masonry. The early degrees reminded me of the characteristics needed in a man to lead a moral and ethical life. But I already had good examples of such men in my life. The rituals of the Blue Lodge served only as confirmation that the respected men I knew in my community also understood the moral tenets of Freemasonry.

But the Scottish Rite was urging me to go deep inside myself to that place where the real mysteries are concealed. I was given the Clavis ad Mysterium, or the Key to the Mystery, and was told it was the key to self knowledge. It would eventually unlock for me the true nature of myself, which was also the true nature of Freemasonry. At once, I knew what the middle chamber meant; that I had already made the flight of winding stairs which was my profane, or exoteric, life. In the journey I was about to take, I would walk the ancient path of consciousness with a key that could unlock the holiest place on earth—the divine core of my being. It was the inner way.

It is an incredible epiphany when one discovers that he must first descend in order to climb the slope of the Mountain of Truth!

One May 23, 1971, I intuitively realized I had “passed from the square to the compasses.” All that was left for me was to affect a discipline in my performance of the duties required to make the journey to the Holy of Holies. And it was essential that I do so.

For such a journey is the ultimate undertaking of any man’s lifetime.