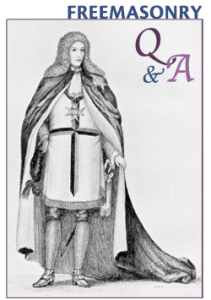 Chevalier Andrew Michael Ramsay, a Scotsman, was tutor to Charles Edward Stuart, “Bonnie Prince Charlie,” and his brother in their French exile. Ramsay joined the Horn Lodge in Westminster in 1730 about the same time the Third Degree was being introduced. In 1737 he was the Grand Orator of some Masonic body in Paris and gave an oration, apparently as part of the initiation of new members. It is famous because it contains in one place most of the major components of the high degrees.
Here are a few excerpts from Ramsay’s oration, which was published in 1741 and later found in a manuscript version:

Our ancestors, the Crusaders, gathered together from all parts of Christendom in the Holy Land, desired thus to reunite into one sole Fraternity the individuals of all nations….

Our founders were not simple workers in stone, nor yet curious geniuses; they were not only skilled architects, engaged in the construction of material temples, but also religious and warrior princes who designed to enliven, edify, and protect the living Temples of the Most High.

King Solomon wrote in hieroglyphic characters, our statutes, our maxims and our mysteries, and this ancient book is the original Code of our Order. … After the destruction of the first Temple … the Great Cyrus … appointed Zerubbabel as Grand Master of the Lodge of Jerusalem and instructed him to lay the foundation of the Second Temple, where the mysterious book of Solomon was deposited. … This book … was lost until the time of the Crusades, when a part of it was rediscovered after the relief of Jerusalem.

The Kings, princes, and lords returned from Palestine to their own lands and there established divers Lodges….

By degrees, our Lodges and our Rites were neglected in most places. … Nevertheless, it preserved its splendor among those Scotsmen to whom the Kings of France confided during many centuries the safeguard of their royal persons.

Eventually Ramsay’s “Crusaders” morphed into the Knights Templar, and then the theory of Masonic descent from the Templars grafted itself onto Masonry. There is, of course, a “chicken or the egg” argument here. Which came first: Ramsay’s Oration or the theory of Templar descent? In the absence of the slightest hint of any knightly connection with Freemasonry before 1737, the nod must go to Ramsay’s Oration.