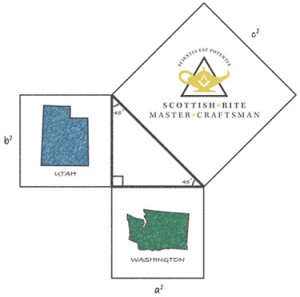 The Master Craftsman Program, a Masonic Education correspondence program developed and sponsored by the Supreme Council, was introduced to the Southern Jurisdiction in March 2008. Since then, it has grown to over 4,000 participants from all over the world and spawned a follow-on program (Master Craftsman II) and a new study group initiative meant to foster more interaction and fraternalism within the program.

So far, the highest concentrations of participants in the Master Craftsman Program are both in the west: in the Orients of Washington and Utah. While both states are large in geographic terms, in population and membership terms, these states are very different—one small, the other large. But what they have each done in promoting and cultivating successful education programs is strikingly similar.

So what makes them so special? Is there a “formula” to follow that predicts success like theirs? And how did they do it? In short, there does seem to be a formula, and its secret lies in the method in which these notable Orients went about introducing and growing their cultures of education, leadership, and empowerment.

As is the case with most successful ventures, it all starts with leadership. In this instance, it should come as no surprise that two of the biggest supporters and proponents of a formal Masonic education course for the Scottish Rite were Ill. Bill Miller, 33°, SGIG in Washington, and Ill. Curtis Lancaster, 33°, SGIG in Utah. Both were there at the beginning as members of the Strategic Planning Committee that drafted a five-point strategic plan in 2005. And both said their focus on that committee was Strategic Objective #1—“Fulfill the promise of additional Masonic knowledge through education and training.”

Ill. Lancaster presides over a rather unique situation. As previously mentioned, Utah is a large state geographically; however, it only has one Valley. Additionally, over 40% of all Master Masons in Utah are members of the Scottish Rite. Because of this, Ill. Lancaster is able to be involved on a local level as SGIG on a day-to-day basis. This affords him the opportunity to take a more active role in the leadership of his local area. It also adds to his ability to oversee projects that he sees merit in. Master Craftsman was one of those projects.

Ill. Lancaster says, “I let the membership know what we were talking about in our Strategic Planning meetings right away. It was a way to let them know what was coming and build some excitement.”

Ill. Lancaster also took the opportunity to identify members that were energetic and hungry to help. He made sure they were kept abreast of the latest developments from headquarters in Washington, and appointed an Education Director for his Orient—Bro. Jason Mitchell, KCCH. Bro. Mitchell, an education application programmer by trade, had always been excited about Masonic Education. Soon after joining the Scottish Rite, Bro. Mitchell found a place for himself as the sound tech for the Valley of Salt Lake City, and he was pleased to find out that this responsibility came with a full text version of the ritual. He read and re-read them in order to memorize his sound cues, but in the process, he was surprised to find that a lot of the ritual was starting to stick.

It all culminated for him when he was named a Fellow for the Scottish Rite Leadership Conference in Phoenix in 2004. During his Fellows section of the conference, the Grand Commander asked, “Why wouldn’t you do the 18° before the 4°?” Bro. Mitchell raised his hand and answered the question, remembering the ritual of both those degrees from his work in the sound booth. He says, “I think the Grand Commander was surprised that someone knew the answer to the question.”

So when the Master Craftsman Program came out, it was natural that he would participate. And now, as the Education Director, Bro. Mitchell promotes the program at the reunions by challenging the new initiates’ knowledge of the degrees and offering them answers in the texts of the Master Craftsman Program. He says, “I usually get 60–70% of the class to sign up right there!”

Additionally, at every business meeting of the Valley, Bro. Mitchell moderates a free-form discussion before or after the meeting for members who are participating in the program. “I kind of start it, and then let them go,” he says. His goal is “to get guys to finish the programs; to get them to think about Masonry; and to get them involved.”

Next on his plate is dealing with Utah’s immense geographical size and the strain that puts on active membership. He says, along with Ill. Lancaster, they plan to do this by first “setting up informal, regional leadership in remote parts of the state, with the goal being to form Scottish Rite Clubs later.” A key part of the agenda at these regional meetings will be the Master Craftsman Program.

He is also using the Master Craftsman Program to spur improved fraternal relations within the Orient by augmenting the formal education with mentorship from older members. He says, “The older generation was not raised with the free and ready access to information like we have today, so they can sometimes feel a bit out-paced by the level of education that our younger members are looking for.” So Bro. Mitchell looks to keep them involved through the sharing of their accumulated knowledge and wisdom in order to augment the younger members’ information they are receiving through internet and book study. “They want to be mentors, and we help them do that.”

Ultimately, though, Ill. Lancaster had in mind a single goal for this work—make his members better Masons and in turn, it will help them make themselves better men. “Education is a key to membership,” says Ill. Lancaster.

The results are black and white, he says. “There is no question our membership is more educated. Our involvement in Lodge of Perfection meetings has risen, and study group interest has increased, as well.” And the number of participants in the Master Craftsman Program bears that statement out—almost five percent of the Orient of Utah are taking the course or have already completed it. That is about five times the national average!

But, his initial success wasn’t enough. In fact, Ill. Lancaster was looking to the future the whole time. This year, he raised initiation fees in order to cover the cost of the Master Craftsman Program for each new member. He did this, he says, because he has seen, “a significant impact on our younger members,” from the program.

Close by, in the state of Washington, a similar story has unfolded. “I was just concentrating on fulfilling the promise,” says Ill. Bill Miller, SGIG in Washington. “If we pay attention to education and give [our members] what we promise, then the rest will follow. In fact, I think it’s the key to membership longevity.” Again, leadership proved to be the all-important first step toward the success of this program.

Ill. Miller defines his approach to leadership as “liberal.” He doesn’t mean that in a political sense, but rather as a way to say “loose” or “adaptive.” Instead of giving people projects and assignments that he wants done, he lets his local leaders tell him what they want to do and then gives them the authority and support to accomplish their self-made goals. He explains, “I participate, too, to set an example. And once they are successful, others want to participate, too.”

The effects have been impressive, too. Ill. Miller reports that there has been increased attendance to Valley meetings, and “a buzz of enthusiasm around the Orient.” But it doesn’t stop there. Ill. Miller (like many active Masons), is involved with a number of other Masonic groups and bodies. At a recent York Rite gathering in North Carolina, he says they were talking about the Master Craftsman Program, and that Chris Hodapp, 32°, one of the featured speakers and an NMJ member, talked about the Program as well!

But Bro. Miller, like Bro. Lancaster in Utah, hasn’t let success go to his head. He points out that four percent isn’t really that big of a number and that there is a lot of room to improve, but he is encouraged because, “it still has that huge buzz for such small numbers.” One of the ways he is looking to improve those numbers is through brethren in his valley who have an interest in education, brethren like Ill. John Brett, 33°, of the Valley of Tacoma.

Ill. Brett is a retired Air Force pilot. He is also one of the most energetic people you will ever meet. When asked about his involvement with education initiatives in Washington, Ill. Brett could hardly contain his excitement. He is an active member in a slew of Masonic bodies, and says, “I get frustrated when guys are members and they sit on their hands. So I try to figure out why that is and attempt to rectify the situation.”

In the Air Force, Ill. Brett was an educator/pilot. He was a flight instructor in T-37s and spent eight years in the Air Training Command. Through these assignments, Bro. Brett gained an understanding of the art of teaching and a love for education. Of the Scottish Rite, he says, “I joined for the education. Twenty years ago [when I joined], I anticipated more education about the degrees.” But he didn’t get it formally. Instead, he, like countless others like him, researched and investigated on his own.

He started the Master Craftsman Program when it became available, and soon heard about a group of brethren who were getting together to discuss their tests and informally work through the program as a group. After visiting one of their group meetings, he felt they were a little unfocused and disorganized. So, he did something about it—he started leading the groups.

Today, they meet once a month before the stated meeting and have two tasks. First, they go over any tough questions the participants are having trouble with and suss out solutions as a group. And second, they talk about what they wrote for their essays. This is important, says Bro. John, because he noticed that participants sometimes were having trouble starting their essays due to the broad nature of the essay question. (Each essay in the Master Craftsman Program asks essentially the same question: “What new or interesting thing have you learned in this section?” ) They have about nine guys, and Ill. Brett hopes to see that number go up as more brethren finish and pass on their positive experiences by word-of-mouth.

Both Washington and Utah seem to be special places, but perhaps not unique. Because the leadership there took a special interest in the program and found the right people to lead it at the local level, they followed the formula perfectly and achieved success. Because their success is formulaic, it can be repeated, but just because the solution is formulaic doesn’t mean it’s easy. All one needs for a successful Masonic education push is attention and dedication from leadership, and the right brethren on the ground to start the program and to keep it going.

Moving forward, the future of the Master Craftsman Program and Masonic education in general, is bright and wide-open. Each person interviewed for this article felt as though we are on the verge of a new era in the Scottish Rite—an era that validates our assertion that we are “the university of Freemasonry.” But they were also united in the belief that this would take hard work and that the accomplishments they had made so far were just the beginning and not to be dwelt on.