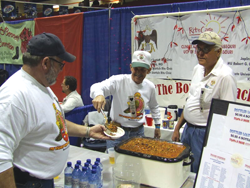 For several years the Valley of St. Joseph, Missouri, held a pancake breakfast to benefit the RiteCare Clinics. When the Valley closed its kitchen in 2008, it needed a new way to continue raising those funds. One of the Valley’s brothers, Bill Swope, KCCH, had been an annual participant in the state’s “Chili-Challenge” held in St. Joseph and had been very successful as a fundraiser. Bill was retired and it was a natural pairing that he and the Valley got together and entered the contest, which benefits United Cerebral Palsy and the Rite Care Clinics.

Not only did the Scottish Rite team win the People’s Choice Award that first year by collecting $10,000, but also the team’s chili won Runner-Up Missouri State Champion. Each year since, the members of the Scottish Rite have continued to raise the bar in an effort to top the last year’s performance. In 2009, the Brothers collected nearly $13,000 and topped that in 2010 by bringing in over $16,000 in donations.

According to Ill. Dale Bryan, 33°, the goal is always to top the previous year’s performance. In 2011, the chili team set its goal at $20,000. The brothers knew that was a very aggressive goal in a weak economy, but when all the donations were counted the Scottish Rite and its generous donors had collected $27,684! One team member was heard to say, “I don’t know how we’re going to top that next year.”

Bro. Swope quickly added, “But we’re working on it!”