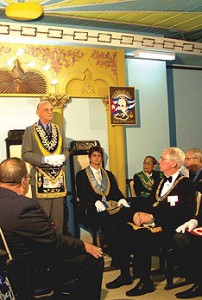 On November 30, 2009, the officers of Tropical Lodge No. 56, F.&A.M. of Fort Myers, Florida, traveled to Cuba to perform a humanitarian act. Their mission was to deliver some donated sporting goods to Logia Soles de Marti as a gift for the Pediatric Oncology Program under a License from the US Government. This compassionate mission was a success and it was a first under the US Embargo with Cuba. While performing this act, a Twinning Ceremony also took place on December 2 between Tropical Lodge and Logia Soles de Marti. The ceremony took place in Logia Soles de Marti’s lodge room in the Gran Templo Nacional Masones located on Avenida Salvador Allende in Havana, Cuba. This was the first time in Tropical Lodge’s history that a meeting of the lodge was officially and formally opened on foreign soil in the Master Mason Degree by dispensation from both the Grand Master of Cuba and the Grand Master of Florida. The ceremony was performed in conjunction with the 150th Anniversary of the Gran Logia de Cuba, A.L. y A.M. The lodge room that evening was so packed that many Brothers stood in the West because there were not enough seats for everyone.

A Masonic cachet envelope, postmarked in Havana, Cuba on December 2 was created by R.W James W. Hogg, PDDGM, to commemorate this event. One of these covers was placed in a special frame and formally presented to Tropical Lodge at their stated communication on December 15, 2009.