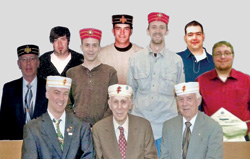 When we hold Friendship Dinners for potential Masons, sometimes a prospective Mason will say his grandfather or other relative was a Mason. The Phillip’s family has overachieved in their Masonic family tradition.

Ill. Robert R. Phillip, 33°, Valley of Alliance, Nebraska, has seen that five family members have become Master Masons plus another five that have that have gone on to join the Scottish Rite. Yes, that’s right, a total of ten Phillips (covering four generations) are Masons!

Bro. Phillip has encouraged each son, grandson, and nephew to be an involved Mason. The family has three 33° IGH members (father, son and grandson), two KCCH members (grandsons), two 32°members (nephew and grandson) and three Master Masons (two grandsons and a great grandson). Bro. Bob has instilled the Masonic traditions in his family, and they have in turn, as a tribute to him, joined in numbers. Now, Bro. Bob is giving each of them an endowed life membership at a cost of nearly $20,000.

So when someone talks about Masonic family traditions, you can talk about the Phillip’s family.