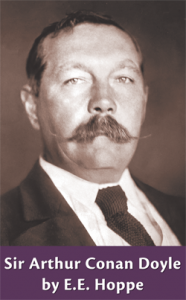 Sir Arthur Conan Doyle was the creator of Sherlock Holmes and Dr. Watson. His stories have inspired over 200 films and 400 fan clubs worldwide. Even people who have never read a Sherlock Holmes story know who Holmes is.

From 1897 to 1907 Doyle and his family lived at a home he named “Undershaw” where he wrote some of his most memorable work and celebrated some of his biggest accomplishments. Undershaw, designed by Doyle himself, was an impressive home with a two-story entrance hall, eleven bedrooms and dressing rooms, a dining room that could seat 30, and it even had a power plant to provide electricity to the house.

Bro. Doyle was a member of Phoenix Lodge No. 257 during part of the time he lived at Undershaw. He received his knighthood while living there, and wrote more than 15 of the 56 Sherlock Holmes stories including the famous Hound of the Baskervilles. J. M. Barrie, who wrote Peter Pan, and Bram Stoker, author of Dracula, were frequent guests. Doyle formed the Undershaw Rifle Club for training sessions to make marksmen of English men. Others copied the idea, resulting in the British Army welcoming trained marksmen at the start of WWI.

Undershaw now stands neglected and vandalized, owned by a developer whose plans for Undershaw involve destroying the historic value of Sir Conan Doyle’s home and legacy. Sadly, last June permission was granted for this development. The Undershaw Preservation Trust was formed to save Undershaw and perhaps make it into a museum. The Trust hopes to bring public awareness to the plight of Undershaw through their website (www.saveundershaw.com), worldwide representatives, and support from prominent authors and actors, including Mark Gatiss, actor and co-creator of the BBC “Sherlock” TV series, and who is patron and sponsor of the Trust. Visit the website and see how you can help. ­